Heavy rains and flooding caused by the southwest monsoon combined with a low-pressure weather front, forced over 260,000 people to flee their homes in the Philippines last weekend August 13-14. The intense monsoon rains affected six regions of the country, mostly in Luzon, triggering flooding as well as landslides in some parts of Rizal province and Northern Luzon...Days after the torrential rains, close to 18,000 people remain housed in 77 designated evacuation centres across the country. On August 17, Dagupan, a city 200 km north of Manila declared a state of calamity, following a city-wide flooding. (IFRC, 18 Aug 2016)

On 14 September, Typhoon Meranti (locally named Ferdie) exited the Philippine Area of Responsibility. As of 17 September, some 2,700 families (10,300 people) have been affected in the provinces of Batanes, Cagayan, and llocos Norte. In Batanes, 292 houses were destroyed and 932 houses partially damaged. Local authorities are continuing to provide aid to families affected by the typhoon. (OCHA, 19 Sept 2016)

In Maguindanao, heavy rains caused flooding on 13 October. This affected 5,890 families (29,450 people) in the municipalities of Datu Montawal (Pagagawan), Pagalungan and Sultan Mastura. Local authorities provided assistance to the families affected by the flooding. (OCHA, 17 Oct 2016)

On 19 October, Category 4 Typhoon Haima (locally named Lawin) made landfall in Cagayan province. After landfall, the storm left a broad path of debris, causing flooding and landslides, and damaging about 46,000 houses. As of 24 October, authorities have confirmed eight fatalities and approximately 159,000 people remain displaced (38,000 people are staying inside evacuation centres and 121,000 people outside of evacuation centres). The Government is leading the humanitarian response and has declined an offer of international assistance. (OCHA, 24 Oct 2016)

As of 28 October, nearly 31,000 people remained displaced in Region III and Cordillera Administrative Region as a result of Typhoon Haima (4,000 people are in 20 evacuation centres and 27,000 are hosted by relatives and friends). Around 192,000 houses have been damaged, mostly in Cagayan and Isabela provinces. The Government, local and international NGOs are providing assistance to the affected communities. (OCHA, 31 Oct 2016)

By 16 November, at least 1.5 million people were negatively affected by Typhoons Sarika and Haima, mainly concentrated in Ilocos Region, Cagayan Valley, Central Luzon and CAR. Large numbers of people were still living in temporary shelters and relying on humanitarian support. Most of the population affected by the typhoons is critically dependent on agriculture for their livelihoods and many are vulnerable to food insecurity. Overall, more than 170 000 farmers were negatively affected. It is critical that affected farmers receive appropriate and timely agricultural assistance, including rice and maize seeds for planting of the 2016/17 secondary season crops, irrigation tools, fertilizers for rice and maize crops, as well as, equipment for planting and harvesting, together with the provision of storage facilities. (FAO, 16 Nov 2016)

Heavy rain caused floods and landslides in several parts of the country in late November. Approximately 133 mm of rain was recorded s in Iba (Zambales province, Central Luzon) over 27-28 November. As of 28 November early morning (UTC), national authorities reported that more than 14,300 people were affected, more than 12,400 evacuated and 16 homes damaged throughout the regions of Mimaropa, Eastern, Western and Central Visayas as well as Northern Mindanao. (ECHO, 28 Nov 2016)

As of 8 December, 3,500 families were displaced in Dipolog City and Polanco town in Region IX, due to flash floods. All families were staying in 25 evacuation centres. The government has distributed food packs to affected families. (OCHA, 12 Dec 2016) 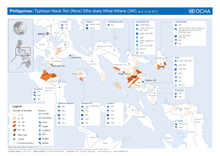 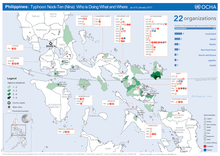 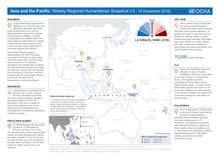