Several Central American countries have been affected by floods and landslides since June 2016. The situation was compounded by hurricane Otto, which struck Central America at the end of November.

In Mexico, several states were affected by floods triggered by heavy rains in August 2016. The Ministry of the Interior declared a state of emergency for some municipalities in the states of Chiapas, Guerrero, and Baja California. (PAHO, 10 Aug 2016) In September, at least 13 people died in the States of Guerrero and Chiapas, southern Mexico, due to a landslide from an overflowed river, official sources reported. Several tons of mud and stones collapsed into the neighborhood of San Francisco. (PAHO, 19 Sep 2016) On 16 December, The Ministry of Interior declared a state of emergency for the municipalities of Santiago Tuxtla, Coatzacoalcos, and Yecuatla in the state of Veracruz de Ignacio de la Llave, as severe rains and strong winds hit on 8-10 December. (PAHO, 19 Dec 2016)

In Guatemala, heavy rains caused damage in four departments affecting 900 people in July. Heavy rains and strong winds damaged at least 160 houses in the departments of Suchitepequez, Alta Verapaz, Izabal and Escuintla. (OCHA, 11 Jul 2016)
According to national authorities, 300 people were affected and over 50 houses were damaged due to floods and strong winds in the departments of Izabal and Jutiapa. (ECHO, 4 Jul 2016)
In August, two thousand people had to be evacuated due to the conditions of rain and hurricane Earl, which affected the country, especially in Petén and Izabal. (PAHO, 11 Aug 2016)
On 11 September, the National Coordinator for Disaster Reduction (CONRED) reported that landslides, floods, and cave-ins caused by rains affected 5, 305 people in the departments of Guatemala, Sacatepéquez and Santa Rosa. 32 houses with damage were also reported. (PAHO, 11 Sep 2016)
According to the national disaster authority, the 2016 rainy season has affected some 308,578 people with 270 incidents caused by heavy rains. (Gov't of Guatemala, 3 Jan 2017)

In Honduras, more than 400 families were directly affected by floods in the province of Choluteca in October 2016. National authorities delivered food assistance to 1,300 families in Lamasigüe, Choluteca and Marcovia. (Gov't of Honduras, 26 Oct 2016)
On 30 January 2017, The Permanent Commission of Contingencies (COPECO) reported that at least 7,500 people have been affected by heavy rains due to the passage of a cold front in the department of Atlántida. There are reports that many people have become isolated in the communities of Urraco, Esparta, Jutiapa, and La Ceiba and 44 houses have been affected.(PAHO, 1 Feb 2017)

On 1 June 2016, Nicaragua's National System for Prevention, Mitigation and Attention to Disasters (SINAPRED) reported 98 homes affected, 53 flooded houses, 43 houses with partial damage from winds and two homes semi-collapsed in the capital by recent rains. Greater impact was reported in the towns of Ocotal and Santa María de Nueva Segovia. (PAHO, 1 Jun 2016) As of 11 July, the water level of the Rio Grande de Matagalpa was rising and families in surrounding communities on alert, as a result of heavy rains. (OCHA, 11 Jul 2016) In December, strong rains affected the Southern Caribbean region leaving 123 homes affected and 3 contaminated wells in the municipalities of Lagunas de Perlas, Kukra Hill, Bluefields and Rama due to strong rains. Furthermore, overflowing of the Caño Chiquito River has been reported; (PAHO, 13 Dec 2016) furthermore, flooding of the San Juan River flooded 95 houses and contaminated Wells. Affected families are being responded to in El Jobo, El Zapotal, San Juanillo and El Delta. (PAHO, 12 Dec 2016) 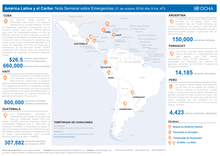 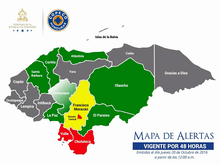 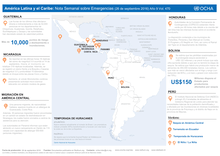