The mid-June 2016 seasonal heavy rain caused flash floods affecting over 177,035 people across sixteen states of Sudan. The affected people had houses and latrines destroyed in addition to destruction of schools, health facilities, roads, bridges among other infrastructure.

As of 11 October 2016, more than 35,407 families are reported to have been affected in the states of Khartoum, Northern State, Sennar, North Kordofan, South Kordofan, Kassala, Gezira, Gedarif, Central Darfur, White Nile and North Darfur according to the rapid assessment reports of the Sudanese Red Crescent Society branches, Civil Defence and HAC.

At least 36 people are reported to have died (according to the Sudan National Council of civil defence) and 147 injured across Sudan since the start of heavy rains. Over 35,407 houses are reported to have been destroyed, with over 15,574 houses partially damaged, over 2,161 latrines damaged and 416 public institutions, mostly schools, have been affected.

Based on forecasts from the Sudanese Meteorological Authority and the Ministry of Water Resources, more rains are expected. The water levels in the Nile River have increased, surpassing the water level recorded during the 1988 flooding. While the humanitarian actors in Sudan continue to provide emergency assistance in the affected states, critical needs remain in emergency water sanitation, basic health, safe water, and environmental sanitation. IFRC, 11 October 2016

The flood level of the Nile has reduced due to the end of the main rainy season in the upper catchment but the extensive damage of water supply and distribution systems in several locations has forced communities to utilize unprotected and unsafe water source. SRCS volunteers have extended their response in hygiene awareness, cleaning campaigns, draining of accumulated water and household water treatment. Access to remote areas by road and on foot is improved to conduct more health-related awareness creation activities and to monitor and assess the damaged water systems. (IFRC, 10 Feb 2017.) 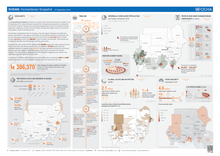 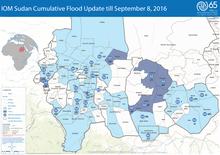 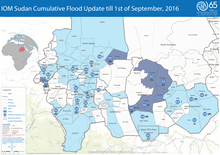