Torrential rains and corresponding flash floods since late March have left at least 236,890 people displaced. This year’s belg rains, though late in onset, were heavier than usual both in terms of intensity and geographic coverage. Additionally, the floods are happening on the back of nearly 18 months of drought that left communities’ coping capacity weakened. (OCHA, 16 May 2016)

Recent flooding continues to displace people as well as damaging several water points. On 2 September 2016, the Ethiopia Humanitarian Country Team released a joint plan to support Government response to acute watery diarrhoea (AWD) in Ethiopia. The plan is aligned with the Government's National Preparedness and Response Plan for AWD and the revised 2016 Humanitarian Requirements Document (HRD). The AWD plan outlines activities in the health and WaSH domains requiring $22.4m to the end of 2016, which donors are encouraged to support. (OCHA, 12 Sep 2016)

Most people displaced by floods (91 per cent) returned to their area of origin, and may require further support to minimize seasonal displacement in the future. OCHA, 31 Oct 2016 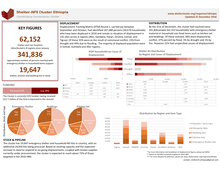 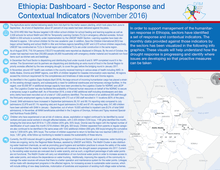 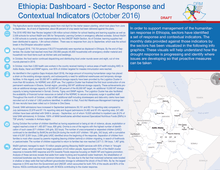