In June 2016, severe weather, including heavy rain, thunderstorms and hail, affected the central and southern areas of the country, causing casualties and damage. According to national authorities, five people have died, one has gone missing, 11 have been injured, over 3 600 people have been evacuated and over 23 600 houses have been partially or fully damaged in the provinces of Shanxi, Henan, Hubei, Sichuan, Shaanxi, Gansu, Guangdong, Guangxi, Hainan, as of 7 June. (ECHO, 7 Jun 2016)

As of 23 June, 9 million people have been affected by torrential rainfall across 10 provinces of southern China, with flooding triggering the temporary evacuation of at least 388,000 people. Also on 23 June, severe weather in the coastal province of Jiangsu spawned a tornado as well as torrential rain and hailstorm. The severe weather caused 98 deaths, with at least 800 people injured and more than 8,000 homes destroyed in Funing County. (OCHA, 27 Jun 2016)

Torrential rainfall over the middle and lower Yangtze River in late June exacerbated flooding in the surrounding areas. The most recent rainfall affected nearly 2.8 million people in 11 provinces (Jiangsu, Zhejiang, Anhui, Fujian, Jiangxi, Hubei, Hunan, Chongqing, Sichuan, Guizhou, and Yunnan). At least 14 deaths have been recorded and some 20 people are reported missing, with 120,000 people temporarily relocated due to the recent flooding. With 40,000 people in need of immediate assistance, the Government of China launched a Level IV (national) emergency response, with emergency supplies delivered to the affected areas. (OCHA, 4 Jul 2016)

Heavy rains and hailstorms have triggered severe floods and landslides in parts of Southern China, affecting over 600,000 people and displacing over 240,000 people. According to government estimates published at the beginning of July, 128 people were killed while another 42 were reported missing. On 9 July, a landslide caused by torrential rains in Xinjiang Autonomous Region of China took the lives of another 36 people. (IFRC, 12 Jul 2016)

Since 18 July, continuous heavy rainfall affected several areas of northern, central and eastern China triggering floods and landslides. As of 28 July, 417 flood-related deaths had been recorded, with 162 people still missing. The China National Commission for Disaster Management and the Ministry of Civil Affairs have launched 16 Level IV national responses and deployed 17 teams across the affected areas. No international support has been requested. (OCHA, 1 Aug 2016)

In August, flooding in five provinces (including Beijing, Hebei, Shandong, Liaoning and Heilongjiang) has affected around 78,000 people and caused one death, while some 4,400 people have been temporarily relocated. Heavy rain and flooding also continue to impact Fujian, Guangdong and Jiangxi provinces in southern China with 121,000 people affected and 4,700 temporarily relocated.(OCHA, 22 Aug 2016)

As of 19 September, typhoons Meranti and Malakas have affected 2.7 million people across 16 cities and 107 counties in Shanghai, Jiangsu, Zhejiang, Fujian, and Jiangxi provinces, with 29 deaths and 15 people missing. Level IV emergency responses were launched by the China National Disaster Commission for Disaster Reduction (NCDR) and Ministry of Civil Affairs for Fujian (16 September) and Zhejiang (18 September), with more than 4,100 people in need of immediate assistance. (OCHA, 19 Sep 2016)

Since 18 September, torrential rainfall has caused flooding, mud flows and landslides in Sichuan and Yunnan provinces. As of 22 September, 14 deaths were confirmed and nine people were reported missing while an additional 5,400 people were temporarily relocated. 81,000 people across 28 counties and 13 cities in the two provinces have been affected, including over 8,000 people who need immediate assistance. (OCHA, 26 Sep 2016) 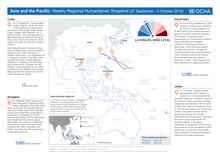 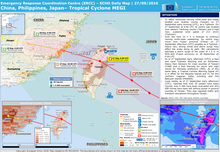