Since 29 June 2015, heavy rainfalls in the south and southwest of Venezuela have caused river overflows and subsequent floodings, including in the states of Apure, Táchira, Mérida and Zulia. More than 40,000 people have been affected (UNCT, 7 Jul 2015). On 9 July the overflow of the Bocono river affected some 2,000 families in the southwestern state of Trujillo, and the national government declared the state of emergency in the municipality of Páez in Apure. On 10 July, the humanitarian partners in Apure and Táchira, including UNHCR, coordinated aid delivery to the city of Guasdualito in Apure.(UNCT, 9 Jul 2015)

The IFRC reported a lack of capacity to find shelter for the 60,000 people whose houses were inundated in Guasdualito (90% of the population was affected as the water levels reached 2 meters). (IFRC, 19 Jul 2015) 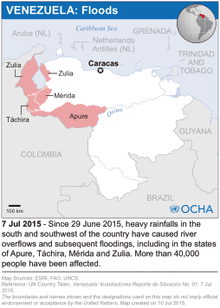