Heavy rainfall over the weekend of 4-5 Apr 2015 affected almost 9,000 families in Haiti: 8,413 families in the West department (89 per cent in Cité Soleil and 8 per cent in Tabarre) and 449 families in Grande Anse. Six people died in flooding in Port-au-Prince, including five children. A total of 8,770 houses were flooded (85 per cent in Cité Soleil) and 62 destroyed (46 in Delmas and 16 in Grande Anse). 245 families evacuated spontaneously (mainly in Delmas and Tabarre). The main reasons for the damage caused are the lack of cleaning of drainage canals and unplanned construction in the ravines. Distribution of food and non-food items for the affected families and cleaning of the drainage system and ravines are the most urgent actions to be undertaken. The Civil Protection Department is mobilizing existing contingency stocks of partners (mainly NGOs and UN) and coordinating the response with the help of OCHA. No official request for additional assistance has been made so far by the Haitian government. (ECHO, 8 Apr 2015) 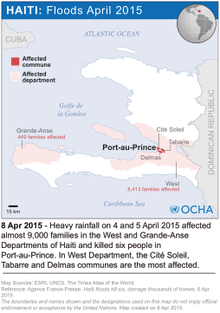 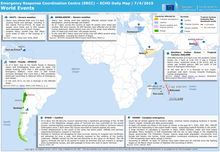