Heavy rainfall on 3 Mar 2015 caused river overflows in Papua New Guinea's provinces of Western Highlands, Central Highlands, Southern Highlands and Jiwaka. As of 4 Mar, local authorities and local media report six people killed in the village of Polga in Jiwaka province, while a number of houses were destroyed throughout the affected area. In total, about 100,000 people were affected by the rainfall and floods. (OCHA, 9 Mar 2015) On 17 Mar, the Government approved disaster relief funding for six provinces (West New Britain, Jiwaka, Southern Highlands, Bougainville, Oro and Gulf) that had sustained extensive damage during recent extreme weather. In making the announcement, the Prime Minister said millions of people across Papua New Guinea had been affected and a number of lives lost due to extreme weather. "The extent of the damage in many areas of Papua New Guinea has never been seen before," he said. (Govt, 17 Mar 2015) According to the IFRC, up to 20,000 people have been affected by flooding in West New Britain, and Papua New Guinea Red Cross Society has held meetings with the National Disaster Coordinator to agree on a plan of action for response (IFRC, 18 Mar 2015). 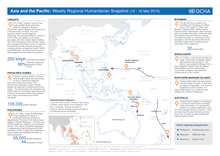 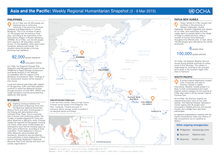