Beginning in September 2014, floods, heavy rains, hail and landslides affected several parts of Peru including Arequipa, Loreto, Cusco, Amazonas, and San Martin. As of the beginning of February 2015, various districts of the forest areas were under a state of emergency as a result of weeks of rains. In the departments of Loreto and San Martín, more than 30,000 people have been affected and 2,000 are homeless. An orange alert is active for the Amazon River and a red alert is active for other major rivers at the Peruvian jungle. Authorities are coordinating to provide aid to people affected by the ongoing hail, rains, flooding, and landslides. (OCHA, 9 Feb 2015)

By 20 Apr, as a result of heavy rains in the region of Loreto, more than 115,000 people had been affected in urban and rural areas. The Government declared a 60-day state of emergency on 9 Apr in 22 districts of four provinces. At least 25 shelters were operational, housing about 500 families. About 800 schools were flooded. (OCHA, 20 Apr 2015).

In June, OCHA mobilized US$915,000 from the UN Central Emergency Response Funds (CERF) to reinforce local response efforts to help affected families and ensure that they have access to safe water, sanitation and hygiene services, and food assistance. CERF projects will help more than 22,000 people affected by floods in six of Loreto’s districts.(OCHA, 16 Jul 2015)

On 9 August, the Government declared a state of emergency of 60 days for 17 northern districts close to the border with Ecuador, in view of flooding risks due to heavy rains. (RedHum, 9 Aug 2015)

Early September the government extended the state of emergency in vulnerable regions for 60 days, to step up preparedness efforts and prepare for a strong El Niño phenomenon. (Voice of America, 3 Sep 2015). The impact of el Niño could be more severe in the first quarter of 2016 (El Comercio, 17 Sep 2015) and while the north of the country is particularly affected, it is estimated that more than 220,000 people are also at risk in the south. (El Comercio, 15 Sep 2015) 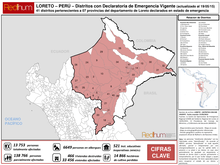 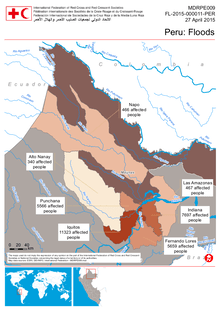 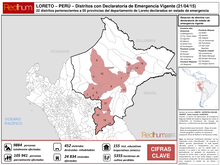