According to Colombia's Institute of Hydrology, Meteorology and Environmental Studies, a second rainy season started at the end of September 2014. In October, more than 52,000 people were affected and 24 were killed by events associated with increased rainfalls, such as floods, landslides and winter storms. (OCHA, 31 Oct 2014) By 24 Nov, more than 100,000 people had been affected and 44 killed (OCHA, 24 Nov 2014). At the beginning of December, floods and landslides affected almost 9,000 people in Chocó (OCHA, 12 Dec 2014).

By the beginning of February 2015, 11,000 people had been affected by floods and landslides in the department of Chocó. The rains increased in the region in mid-January, causing the level of the Atrato and Baudó Rivers to rise. (OCHA, 9 Feb 2015) 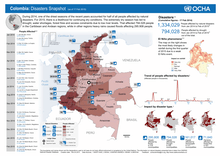 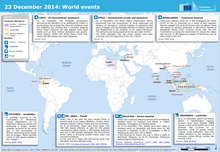