After a prolonged 2012-2013 wet season that continued into August, Indonesia experienced a brief dry season which transitioned into the 2013-2014 wet season in most parts of the country by the end of October. Floods and landslides killed 35 people in November and affected almost 20,000. (OCHA, 30 Nov 2013)

As of 21 Jan 2014 in Jakarta and outlying areas, approximately 134,662 persons or 38,672 households in 100 urban villages are directly affected by floods, with 12 casualties. At least 62,819 persons are displaced and staying in 253 displacement centers. The government indicated that it has the capacity to respond to both short and longer term needs created by the floods. It also welcomes technical assistance from the international community in the country, particularly for relief aid logistic management. In the North Sulawesi Province, as of 19 Jan, at least 15,000 persons from two cities and six districts are displaced. 19 casualties are reported. (OCHA, 22 Jan 2014) 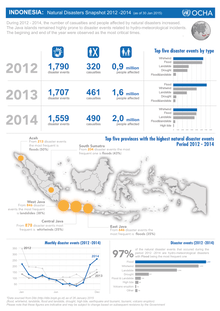 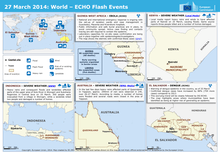 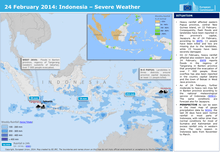