The Southwest Monsoon caused flooding in several areas of the Philippines since mid-June 2013, which was exacerbated by tropical depressions and storms.

Starting on 17 Aug, heavy monsoon rains aggravated by Tropical Storm Trami (locally known as Maring) caused flooding and landslides in 11 provinces and Metro Manila on Luzon island. Several of these provinces were recently hit by Typhoon Utor. As of 22 Aug, 16 deaths had been reported, and some 186,700 people were in 590 evacuation centres while another 193,800 people had sought refuge with relatives and friends. (OCHA, 22 Aug 2013).

Typhoon Usagi (locally known as Odette) struck the Philippines on 21 Sep 2013 in the southern part of Itbayat Island, one of the three main islands of the Batanes group of islands, affecting almost 48,000 people and causing severe damage to agriculture.

Tropical Storm Wutip further enhanced the southwest monsoon, bringing rains and thunderstorms over the western sections of Central and Southern Luzon from 26 to 27 Sep.

Torrential rains brought by the Southwest Monsoon and the effects of Typhoon Danas (locally known as Ramil) between 4 and 8 Oct caused flooding and landslides across the Zamboanga peninsula including Zamboanga city. The living conditions of people displaced by fighting further deteriorated as a result of continuous heavy rains and strong winds. (OCHA, 8 Oct 2013)

Typhoon Haiyan (Yolanda) struck the Philippines on 8 Nov as the strongest typhoon to hit the country in 2013. 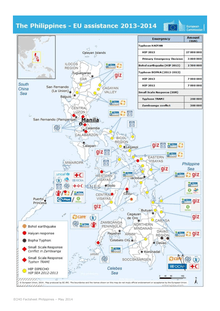 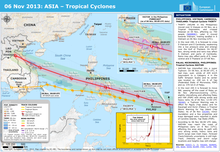 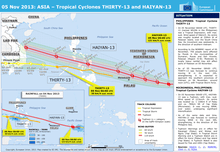