Heavy monsoon rains and overflowing local rivers caused flash floods in various parts of Myanmar in late July 2013, affecting Kayin, Mon and Rakhine States, and Taninthayi and Ayeyarwaddy Regions. The flash floods initially displaced over 38,300 people, leaving six dead and one person missing, and damaged residential buildings, roads and bridges. By 7 Aug, 73,300 people were residing in temporary relocation camps. Many others were able to return to their places of origin as heavy rains ceased and the flood waters receded in most affected locations. (OCHA, 16 Aug 2013)

In September, floods displaced more than 22,000 people across many areas of the country. Many were able to return home after flood waters subsided. While some people were displaced for several weeks, most were displaced only for several days. (OCHA, 30 Sep 2013)

Due to heavy rains, the Sittoung River overflowed and flooded nearby areas in Bago Region from 28 Oct to 2 Nov. In four townships, Taungoo, Yedashe, Ottwin, and Htantabin, approximately 50,000 people were displaced by the floods and sheltered in 72 relief camps opened by the government. Two deaths from the floods were reported. Floodwaters receded on 5 Nov and as of 6 Nov, 15,830 people were in 33 relief camps. As floodwaters continued to recede, they were expected to soon be able to return to their places of origin as well. (OCHA, 30 Nov 2013) 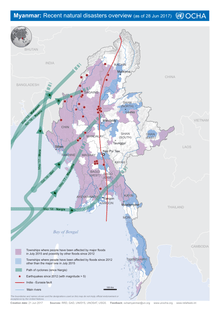 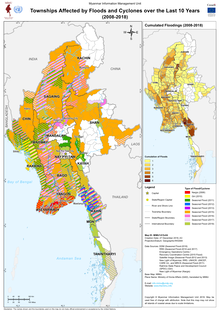 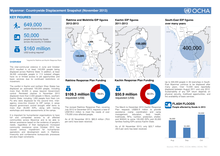