Heavy rains on 14, 15 and 28 Jun 2013 caused flooding in Haiti's Artibonite, Nord-ouest and Centre departments. Six people were killed and over 6,600 families affected. Extensive damage was reported in the agriculture and livestock sectors. It is feared that strategic emergency stocks may be used up early in the rainy season, and it is unlikely that they would be quickly replenished. This could potentially result in large shortages of critical aid supplies, preventing the government and its humanitarian partners from responding effectively to future shocks. (OCHA, 30 Jun 2013) 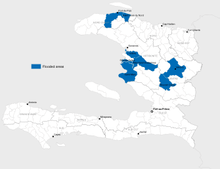