Heavy rains at the beginning of May 2013 caused the banks of the Nyamwamba river to burst, which resulted in flooding in Western Uganda's Kasese district. Eight people have been confirmed dead, and over 25,000 have been affected. The flooding has caused widespread destruction of houses, crops and facilities such as bridges, roads and power lines. Major infrastructures such as a hospital and sewage treatment unit have also been damaged. (IFRC, 17 May 2013)

During the operation URCS worked together with the local authorities and the specialized agency for emergencies, especially the Office of the Prime Minister (OPM). URCS distributed a total of 3,300 shelter and NFI kits (including tarpaulins, cooking pots, cups, plates, blankets, jerry cans, laundry soap, and mosquito nets) for 3,425 households and reached 24,062 of the affected people. URCS also provided psycho-social support to internally displaced persons (IDPs) both in the camps and for the affected families staying with host families. URCS also provided overall camp management activities in the settlements for the displaced. However, camps were later closed and IDPs encouraged to reside with hosting communities, where they continued to receive support from URCS and other relief agencies. (IFRC, Preliminary Final Report, 30 May 2014) 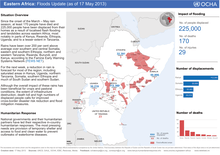 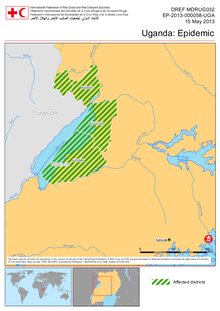 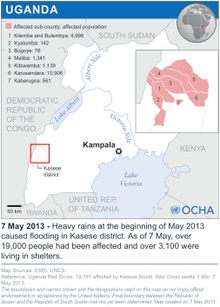