In the second week of January 2013, the rainy season in Bolivia, which usually lasts from November through March, intensified, causing floods, hail storms, frosts, and overflowing rivers. Over 29,000 families have been affected in 88 municipalities in eight of the nine departments of the country. The rains are expected to continue until April, beyond the usual period, as a result of the intensification of the El Niño effect. As of 20 Mar, 25 people had been killed. (UN Country Team, 20 Mar 2013)

More than 25,000 people are in need of food assistance. According to preliminary assessments, affected people will need food assistance for at least three to four months, until they recover their livelihoods. (WFP, 14 Mar 2013) 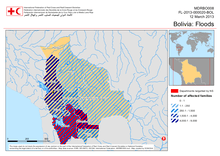 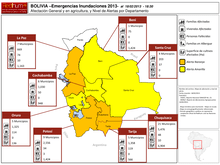 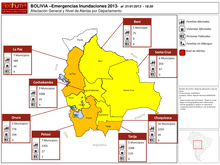