The 2012-13 rainy season affected over 180,000 people in Peru, with Loreto, Arequipa, Cusco, Ancash, Huancavelica and Huanuco regions bearing the brunt. An estimated 3,561 houses were destroyed or damaged, and 1,601 schools were damaged. Close to 30 metric tons of food were distributed among the affected as well as 515 tons of material, tools for temporary shelter and clothes. Over 95 per cent of the 900 emergencies reported in the first quarter were localized emergencies, affecting about 20 families per event. Response efforts were carried out by local and regional governments, although a few regional emergency declarations were issued to facilitate resources for the response. The rainy season is cyclical in Peru lasting from November to May, with the heaviest rains between December and April. Rains cause floods and landslides in vulnerable areas throughout the country. (OCHA, 31 Mar 2013) 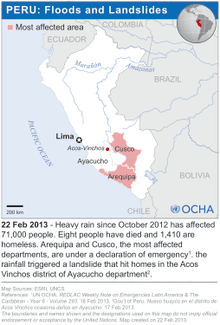