During last week of July 2012, heavy rains increased the water level of the rivers that Costa Rica shares with Panama - especially the Sixaola. The most affected provinces were Cartago and Limón in Costa Rica and Bocas del Toro in Panama. (OCHA, 30 Jul 2012)

In Costa Rica, many communities were flooded, became isolated by the landslides and road damages, and lost access to public services such as electricity and water. Overall, over 124 communities were affected by landslides, with over 9,500 persons directly impacted, prompting the opening of 46 shelters.(IFRC, 17 Apr 2013). 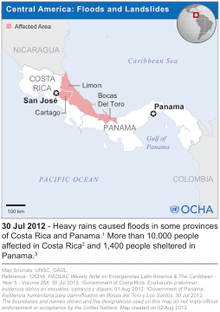