Between May to June 2012, Afghanistan witnessed severe flooding due to the substantial accumulation of snow across the northern region (Kabul, Sar-e-Pol and Takhar provinces) as a result of the harshest winter in 15 years. The melting of snow, together with continuous precipitation in May, resulted in vast quantities of water gushing across the plains where large populations reside, particularly in Sar-e-Pol province. (IFRC, 22 Mar 2013)

The most destructive incident occurred in the Sari Pul province in May, when melting snow coupled with heavy rainfall in highland areas resulted in an increase of the water levels in the Sari-Pul River, which subsequently overflew into the city of Sari Pul. 19 people were killed and an estimated 10,000 were displaced. (OCHA, 22 May 2012) 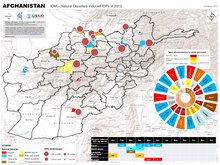 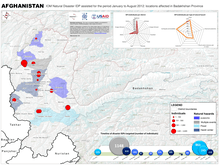 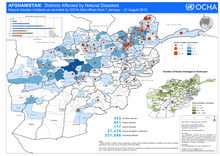