The La Niña phenomenon caused an increase in precipitation levels during the 2011/2012 rainy season in Peru, starting in November 2011. Floods, landslides and mudslides affected 18 of the 24 departments of the country. The National Administration declared a state of emergency on 29 Mar 2012 and extended it on 28 May for an additional 60 days. In the eastern regions, the Amazon River reached the historical level of 118.59 masl (metres above sea level) in March, resulting in floods which severely affected the region of Loreto, particularly the Belén, Iquitos, Punchana and San Juan districts, and approximately 31 per cent of the total population. By 25 Jun, the National Civil Defence Institute reported 222,633 severely affected persons, 73,259 affected persons, 3,454 uninhabitable homes, 59,930 affected homes, 1,584 affected schools, 51 affected health centres as well as the loss of 26,187 hectares of productive land in the department of Loreto. (IFRC, 17 Jul 2013) 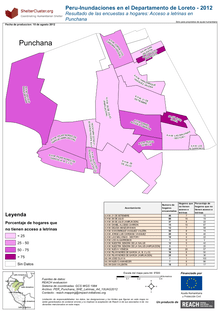 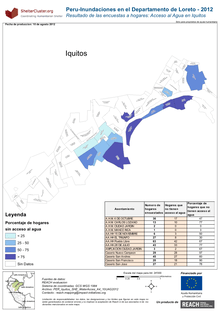 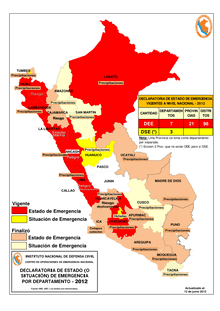