Nine people were killed and more than 6,776 were left homeless after heavy rains caused floods and landslides in Kilimanjaro, Arusha and Mbeya regions (ACT Alliance, 5 Dec 2011 ).

Dar es Salaam city was subjected to massive flooding following unprecedented downpours which started on 20 December 2011. The flood waters overwhelmed the city’s drainage systems, resulting in mass displacement of the city residents, particularly those residing around the Msimbazi River basin. According to the Tanzania Meteorological Agency (TMA), the rains were the heaviest in Tanzania since its independence in 1961. A rapid assessment of the disaster by the Tanzania Red Cross Society indicated that over 200 people were injured, with approximately 2,500 people missing, mostly children. The death toll due to the floods reached 40. The total number of people affected by the floods was over 50,000 (approximately 10,000 families) among which about 10,000 people (approximately 2,000 families) were displaced. The displaced population was accommodated in temporary displacement/holding centers, most of them primary and secondary schools. Damage to property and infrastructure was massive. Several main roads that link the centre to the suburbs were heavily flooded and some bridges were destroyed. Personal belongings of the affected households were washed away by flood waters, which took the meandering river course into the Indian Ocean. (IFRC, 28 Jun 2012) 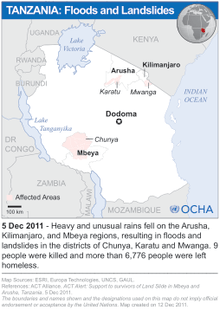