In July 2010, heavy monsoon rains triggered floods and landslides in both southern (Kerala) and northeastern (Assam) India. An estimated 50 people were killed and nearly 500,000 displaced from their homes. Although, the monsoon was a week late reaching northeastern India, when it did arrive near the beginning of the month it brought more than four times the normal amount of precipitation. At least 15 people died in flooded regions in the states of Haryana and Punjab as the downpours continued.(NOAA, 31 July 2010)

In September 2010, more than three million people in northern India (Uttarakhand, Uttar Pradesh and Bihar) were affected by floods that killed more than 200 people. IFRC released funds to support the national society (IFRC, 30 Sep) and completed the operation on 31 March 2011 (IFRC, 30 Jun 2011). 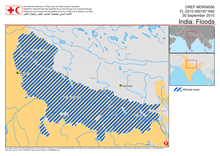 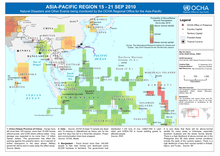 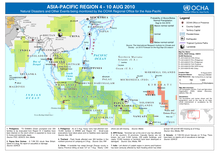