In mid-June 2010, the Northern Rakhine State in Myanmar faced continuous rains that caused flooding in several areas, including Maungdaw and Buthidaung. By 16 June, the government confirmed the death of 42 people (OCHA, 16 Jun 2010), with this number rising to 68 by 2 July. Joint needs assessments estimated that about 29,000 families were severely affected by the floods, including 634 houses completely destroyed in Buthidaung and 180 in Maungdaw (OCHA, 2 Jul 2010). In response, OCHA released an Emergency Cash Grant of USD 49,500 for the purchase of NFIs including tarpaulin sheets, kitchen sets and mosquito nets. (OCHA, 28 Jun 2010) 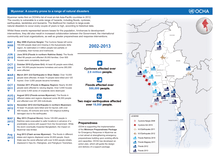 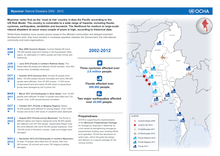