Unusually heavy rains on 4 October in Teluk Wondama district of West Papua province triggered flash flood and mudslides. Flash floods as high as three metres hit the city of Wasior, flattening houses, and killing and displacing residents. Electricity was cut off as a result, while mud deposits damaged infrastructure, including health facilities. The floods have also severed road links, and 1-metre high mud deposits at the local airport meant that only helicopters could enter the city. (IFRC, 8 Oct 2010)

By the end of October 2010, the flash floods that hit the Teluk Wondama district of West Papua on 4 October 2010 took up to 167 casualties and displaced about 9,000 people. 14 villages were affected and Wasior City was the most affected area. (IFRC, 19 Nov 2010) 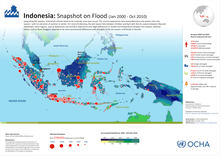