(Ottawa - September 27, 2007) Extensive flooding has affected more than one million people and left 650,000 homeless in over 18 countries in East, Central and West Africa. Flooding and landslides have washed away houses, food reserves and crops, and has contaminated clean water supplies. (Canadian Red Cross, 27 Sep 2007)

Unusually heavy rainfall since July 2007 has led to flooding and waterlogging across a number of districts in eastern and northern Uganda. The Rwizi River in Mbarara (southwestern Uganda) is also reported to have burst its banks. On 19 September, Ugandan President Yoweri Museveni declared a state of emergency in the areas flood-affected areas of Eastern Uganda, which was endorsed by Parliament on 25 September. (OCHA, 2 Oct 2007)

More than 650,000 people have lost their homes and some 200 their lives in the worst floods in the history of Africa affecting large swathes of land all over Eastern, Central and West Africa - and the rains are set to continue into November. In East Africa, Ethiopia, Sudan, Uganda, Rwanda, Somalia and Kenya were badly hit. Hundreds of thousands of people have been affected - Uganda around 90,000, in Kenya around 26,000 and in Ethiopia around 100,000. Thousands more have been displaced. (IFRC, 18 Oct 2007) 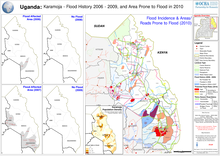 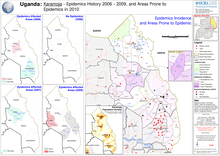