On 31 June, 2006, a weather front moved rapidly into Ukraine from the Balkans causing hurricanes, heavy rains and large hail in several regions. During the three days of heaviest rain (30 June - 2 July), the level of rainfall exceeded the three-month average for the season. A total of 58 settlements were affected by the flooding. The 29 most affected settlements were located in seven rural districts of Ivano-Frankovskaya and Chernovitskaya oblasts and in the Autonomous Republic of Crimea. Some 5,000 people were directly affected - two women were killed, 17 people were injured. IFRC, 23 March 2007 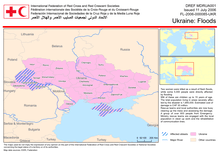