The floodwater levels in the Mekong River Delta reached their peak levels in mid-September. The most seriously affected provinces are Long An, Dong Thap and An Giang. More than 200,000 houses have been inundated, of those 1,739 collapsed and 8,530 were damaged. There has also been significant damage to infrastructure (1,157 schools and 33 clinics flooded, over 32,000 ha of agricultural area affected). (OCHA, 29 Sep 2001)

The Vietnam Standing Office of the Central Committee for Flood and Storm Control (CCFSC) reported an increase in the death toll from the floods: 310 casualties (including 243 children), with a sharp rise in mortality in An Giang and Kien Giang provinces. As of 22 October, CCFSC reported 314,054 inundated households, 1,663 schools flooded, 74,593 ha of agricultural area affected, and an estimated economic loss of 59 million USD. (OCHA, 24 Oct 2001) 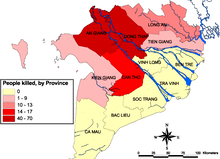 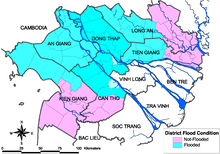