Heavy and unseasonal rainfall across large parts of Afghanistan on the 3 May caused flash flooding events directly affecting an estimated 3,400 people. Local reports indicate that at least 13 people died including in Badghis (five), Baghlan (four), Hirat (one), Kunduz (one) and Parwan (two) provinces. Some 1,270 houses were either destroyed (437) or damaged (833). The number of affected people is expected to increase as assessments are completed. Inter-agency assessment and response teams have been mobilized to assist affected families with nearly 3,400 people assessed and over 1,000 supported with temporary shelter and food assistance so far. Other immediate relief items to be provided include: multipurpose cash, tents, emergency latrines and shelter kits as well as water, sanitation, hygiene, and health services. (OCHA, 10 May 2022) 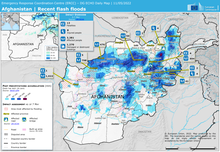 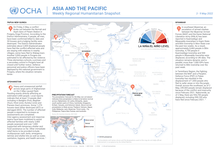