The 2020 Gu’ rains (April-June) have intensified across Somalia, triggering flash flooding in South West State, Jubaland, Bandir, Puntland and Somaliland from 20-23 April. As water levels rise in rivers, there are reports of riverine flooding in Jubaland. FAO’s Somalia Water and Land Information Management (SWALIM) reported heavy rains in Somaliland where on 26 April, Lughaye and surrounding areas received unusually heavy rains of 102mm. On 23 April, heavy rains were also received within the Juba river basin. SWALIM forecasts increased rainfall activity in most areas in Somalia and in the Ethiopian highlands in the coming week, which is likely to keep the water levels high in the Shabelle and Juba rivers. The flooding has started barely four months after heavy Deyr (October-December) rains inundated parts of Somalia, affecting over half a million people; and as the country works to contain the COVID-19 virus, which is exponentially rising and has already infected several hundreds of people. The country is also working to contain a desert locust infestation. OCHA, 24 Apr 2020)

Since 20 April, heavy rain has been affecting most of Somalia States and territories (particularly South West, Jubaland, Banadir, Puntland, and Somaliland) as well as the neighbouring central and south Ethiopia since 24 April, causing rivers to overflow and triggering floods that have resulted in casualties and damage. The worst affected area is the Juba river basin and the Shabelle river basin. In Somalia, as of 29 April, media report 10 fatalities, a number of missing people, around 20 injured people, hundreds more displaced, as well as damage to infrastructure in Qardho Town (Bari Region, west Puntland). (ECHO, 29 Apr 2020)

The number of people affected by flooding in Somalia has risen to 546,103, of whom 216,895 people have been displaced from their homes and 16 others killed since the Gu’ rains started in early April. At least 27 districts are inundated; the worst being Belet Weyne in Hiran region where riverine flooding has displaced more than 115,000 people, according to the district flood taskforce. This includes about 91,000 people who have been displaced from the four sections of the town and 23,220 people from 23 riverine villages. The flooding resulted from a sharp rise in the level of the Shabelle river following heavy rains in Somalia and the Ethiopian highlands. According to the taskforce, more people were fleeing their homes as river levels rise. As of 10 May, the river levels reached 7.93 meters which is 0.37 meter below the bank full level of 8.30 meters. (OCHA, 11 May 2020)

Ongoing flash and riverine flooding in Somalia has affected about 918,000 people, of whom 412,000 have been displaced and 24 killed, in 29 districts, as of 16 May. The risk of disease outbreaks is high due to crowding in areas where displaced people are seeking temporary shelter. (OCHA, 16 May 2020)

As of 19 May, ongoing flash and riverine flooding in Somalia has affected about 919,000 people, of whom 412,000 have been displaced and 24 killed, in 29 districts. Belet Weyne in Hiraan region is the most affected district after the Shabelle river burst its banks on 12 May, inundating 85 per cent of Belet Weyne town and 25 riverine villages. According to the district flood taskforce, about 240,000 people were displaced from the town and neighbouring villages between 12 and 18 May. In Jowhar district, Middle Shabelle region, riverine flooding has affected more than 98,000 people in 37 locations, bringing the total affected in Hirshabelle to 338,000 people. According to the Ministry of Humanitarian Affairs and Disaster Management in Hirshabelle State, nearly 40 per cent of those affected in Jowhar have been displaced from their homes. The risk of disease outbreaks is high due to overcrowding in areas where the displaced people are seeking temporary. (OCHA, 5 Jun 2020)

Flash and riverine floods have since late June affected an estimated 191,800 people in Hirshabelle, South West and Jubaland states as well as Banadir region. Among those affected, about 124,200 people have been displaced from their homes. Another 5,000 peope are at risk of further displacement in Jowhar, Middle Shabelle. Since May, an estimated 149,000 hectares of farmland have been damaged by floods in 100 villages in Jowhar, Mahaday and Balcad districts, Middle Shabelle region. (OCHA, 26 Jul 2020)

The latest floods point to a worrying pattern where extreme weather conditions are increasing in frequency and intensity. Prior to June 2020, flash floods and riverine flooding caused by seasonal rains displaced more than 450,000 in the country. With floods in 2018 and 2019 displacing 281,000 and 416,000 persons respectively, the flood-based displacement figures demonstrate a rising year-to-year trend. Somalia’s re-occurring climate related emergencies result in devastating impact on communities who heavily rely on farming and livestock for their livelihood. (UNHCR, 7 Aug 2020)

Riverine flooding continues to displace people and inundate farmland in rural areas mainly along the Shabelle river valley. The floods, which are attributed to the Hagaa seasonal rains, have affected nearly 500,000 people since late June in Hirshabelle, South West and Jubaland States, as well as Banadir region. (OCHA, 20 Sep 2020) 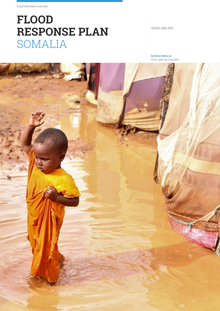 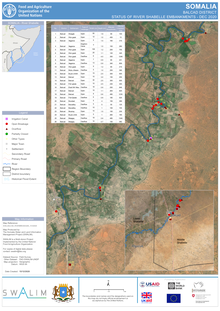 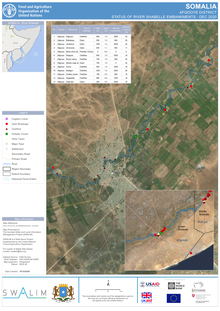 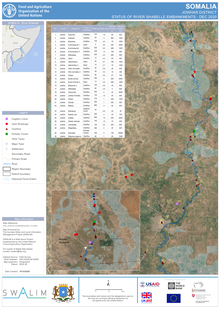