Heavy rainfall has been affecting northern Vietnam, particularly the districts of Muong Te, Sa Pa and Nam Nhun (northern Lai Châu Province) since 24 June, causing flash floods and triggering landslides. According to media reports, as of 26 June, one person died and three are missing. At least 20 houses have been flooded, several roads, including the national highway and the provincial highway, have been damaged by landslides and a bridge collapsed. (ECHO, 26 Jun 2019)

Following Tropical Cyclone Wipha's passage, heavy rainfall and strong winds have affected several provinces of northern Vietnam, causing flash floods and triggering landslides. According to media reports, five people died and 14 are still missing. At least 100 houses have been destroyed, 200 damaged and roads flooded. 500 soldiers and police officers have been deployed to assist in the response.(ECHO, 5 Aug 2019)

Following Tropical Cyclone WIPHA's passage on 31 July in Vietnam, the national authorities report 12 fatalities and 9 missing following flooding and landslides. The most affected provinces are Soc Trang, Ca Mau and Kien Giang, where at least 6,470 buildings have been damaged. A section of sea dyke on the western coast of Ca Mau was at high risk of breaching due to strong waves. Water levels in the Srepok river are approaching alarming levels, while flash flood and landslide warnings are in effect for low-lying districts in Dak Lak, Lam Dong and Dak Nong provinces. Heavy rainfall, thunderstorms and stong winds are forecast across Vietnam from 7-8 August. (ECHO, 07 Aug 2019)

Several provinces in the center, central highlands and south of Vietnam have been impacted by floods following torrential rain over a number of days. The worst affected provinces are Kien Giang followed by Lam Dong. Other provinces affected include Gia Lai, Dak Lak, Dak Nong, Kon Tum, Dong Nai, Binh Thuan and Binh Phuoc. According to a report issued by the National Steering Committee for Natural Disaster Prevention and Control (NCDPC), as of 10 August 2019, 10 deaths have been reported while four people injured and over 1,985 people evacuated. In total 12,141 houses are affected by the floods. In addition, households have lost livestock, gardens and other assets. (IFRC, 11 Aug 2019)

According to a recent report issued by the National Steering Committee for Natural Disaster Prevention and Control (NCDPC), there have been 11 deaths, one (1) missing, five (5) people injured and over 1,985 people evacuated. In total 12,307 houses have been flooded. In addition, households have lost livestock, gardens and other assets. Flooding of the Cam Ly river in Lam Dong peaked on the evening of 8 August 2019 at 834.25m, exceeding all previous records by 0.28m. While the river level dropped slightly to 830.41m on the following day, it remains at dangerous levels. Flooding of the Dong Nai river at peaked on 9 August 2019 at 114.10m. (IFRC, 16 Aug 2019)

On 30 August, Tropical Storm Podul made landfall in Vietnam bringing heavy rains that triggered flooding and landslides in the northern and north central provinces, killing at least six people, damaging 1,200 houses and submerging 400 others. (OCHA, 2 Sep 2019)

Heavy rainfall, caused by the passage of Tropical Depression KAJIKI is affecting Vietnam, triggering floods and landslides. As of 4 September, media report 1 fatality, 1 person missing and another injured in Quang Binh Province (central Vietnam). Many areas of Huong Hoa and Dakrong Districts (Quang Tri Province) remain isolated by the floods, while the population has been evacuated to safer places. A Dam in Huong Son (Ha Tinh Province) was preventively opened, causing flooding in surrounding villages. Several warnings for flash flood and landslides are in effect for central Vietnam. Heavy rain will continue to affect Vietnam over 4-5 September, as KAJIKI moves north-east in South China Sea. (ECHO, 4 Sep 2019)

Following the passage of Tropical Depression KAJIKI, floods and landslides have occurred across Vietnam. According to media reports, as of 5 September, the number of fatalities in Vietnam has increased to 4, while 14 people are still missing. About 1,000 people have been evacuated in Quang Tri Province. Heavy rain will continue to affect Vietnam on 6-7 September. (ECHO, 6 Sep 2019)

After Tropical Storm PODUL and Tropical Depression KAJIKI's passage in recent weeks, flooding has affected Vietnam. According to DG ECHO, as of 11 September, 10 deaths have been reported in Vietnam, around 2,000 displaced and approximately 12,150 buildings damaged. Over the next 24 hours moderate rainfall is forecast over most of the region, with locally heavy rainfall over northern Vietnam. (ECHO, 12 Sep 2019)

In August 2019, several provinces in the center, central highlands and south of Vietnam were impacted by floods following torrential rain. The worst affected provinces have been Kien Giang followed by Lam Dong, Dak Lak and Dac Nong. Other provinces affected include Gia Lai, Kon Tum, Dong Nai, Binh Thuan and Binh Phuoc. According to the latest report issued by the National Steering Committee for Natural Disaster Prevention and Control (NCDPC), there have been 11 deaths, one (1) missing, five (5) people injured and over 1,985 people evacuated. In total, 12,307 houses have been flooded. In addition, households have lost livestock, gardens and other assets. (IFRC, 25 Sep 2019)

Can Tho City in the Mekong Delta is currently experiencing flooding. Local authorities and the public should be prepared for flooding in low-lying areas and near rivers. Most streets in the City centre were flooded, leading to traffic congestion. Many houses have been flooded, traffic and economic activities have been disrupted. (ECHO, 2 Oct 2019)

Heavy rains have affected central Nghệ An and Hà Tĩnh provinces. Schools were closed in the mountainous districts of Huong Son and Huong Khê. Rains are forecast to continue over the next few days. Local authorities have warned residents to take preventive measures against flash floods and landslides. (ECHO, 17 Oct 2019)

The central region of Viet Nam saw over 5,200 houses, 2,800 hectares of crops, and over 1,600 hectares of aquatic farms flooded due to heavy rain over the past week. Nghe An Province was the hardest hit, with three deaths and five people injured. Several landslides were also reported. (ECHO, 22 Oct 2019)

Strong winds and heavy rains resulted in power loss and damaged structures in the southern central provinces of Binh Din and Phú Yên, Vietnam, as reported on 1 November. Authorities evacuated around 15,000 households to safer places. A considerable rise of the water level of Rivers in Phú Yên, including Cai River have been observed representing a high flooding risk. (ECHO, 1 Nov 2019)

As of 4 November, 1 person is reported missing, 14 people have been injured and 20,000 displaced. The authorities warned that flash floods and landslides are still a risk in low-lying and urban areas for the next 24 hours. The Central Steering Committee for Natural Disaster Prevention and Control of Vietnam reported, that the typhoon has destroyed 179 houses, damaged 2,314 buildings and 35 schools in the provinces of Quang Ngai, Binh Dinh, Phu Yen, Gia Lai and Thua Thien Hue. (ECHO, 4 Nov 2019) 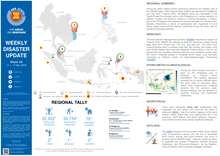 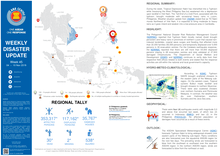 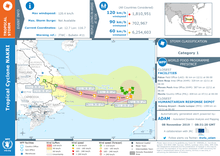