On 1 March, heavy rains struck Kandahar city, Zheri, Dand, Damand, Arghandab, Spinboldak, and Takhtapu Districts. In the last 30 hours, 97mm of rain fell in the affected areas. Flash floods triggered by the heavy rain have reportedly killed 20 people, including a number of children, when their homes collapsed or the vehicles they were traveling in were swept away. At least 10 people, including children, are still missing in Arghandab, Daman, Spin Boldak and Dand Districts. It is anticipated that up to 2,000 homes may have been damaged across all affected districts including Kandahar City. (OCHA, 2 Mar 2019)

As of 3 March, heavy rains have caused flooding in six provinces, Kandahar, Kunar, Zabul, Nimroz, Hirat and Farah. In Kandahar, more than 1,000 people stranded by the flood waters have been rescued by ANSF. Reports suggest that 85 per cent of Farah city has been flooded. (OCHA, 3 Mar 2019).

As of 4 March, eight provinces have been affected by heavy rains and flooding, according Government reports. More than 20 people are reported to have died as a result of the floods, including 13 people in Kandahar province. In excess of 1,600 houses have reportedly been damaged or destroyed, and there has been further damage water systems, agricultural land, schools, mosques and Government buildings. (OCHA, 4 Mar 2019).

As of 5 March, nine provinces have been affected by heavy rains and flooding, according Government reports. More than 40 people are known to have died, and hundreds of others have been injured or are missing. According to the Government, more than 2,500 houses have been damaged and over 1,300 destroyed. Flood affected people are in need of emergency shelter, warm clothing, food and hygiene kits. (OCHA, 5 Mar 2019)

In Kandahar province, some 21,200 people have been assessed requiring humanitarian assistance as a result of the floods. 25 people are known to have died and 40 people have been injured. According to joint assessments conducted by the government and humanitarian partners...in Kandahar and seven flood-affected districts, 1,340 houses have been damaged and a further 1,276 have been destroyed. (OCHA, 7 Mar 2019)

As of 10 March, 33,000 people in Kandahar province have been identified as requiring humanitarian assistance following floods that struck the province at the beginning of March. According to assessments conducted by the Government and humanitarian partners, 2,800 houses have been damaged and 1,850 houses destroyed. Assessments are still ongoing in affected areas that are difficult to access due to insecurity. Humanitarian partners have so far provided 673 flood-affected households with tents, NFIs including winter clothes, food assistance and hygiene kits. The Government has reportedly allocated 126 million Afghanis (US$1.7m) for assistance including shelter repairs, agricultural assistance and food. Since 2 March, there has also been extensive flooding in Hilmand, Herat and Farah provinces, and humanitarian partners are continuing to conduct assessments and provide assistance in these areas. (OCHA, 11 Mar 2019)

Heavy rainfall has being affecting central, southern and western Afghanistan over the past two weeks, triggering floods that have resulted in casualties and damage. The most affected provinces are Kandahar, Helmand, Farah, Herat and Badghis. According to ACAPS (Assessment Capacities Project), as of 13 March, the death toll stands at 70, more than 8,670 houses have been damaged and approximately 250,000 people have been affected. Infrastructure damage, rugged terrain and the ongoing rainfall are hindering the response. Insecurity throughout the country remains high and may restrict operations. Nevertheless, the humanitarian response is being put in place to assist those affected with emergency shelter, food, non-food items, winter clothes and emergency latrines. Over the next 72 hours, locally heavy rain and snowfall are forecast over Kabul area and north-eastern areas of the country. Moderate rainfall and snowfall are forecast over the central areas of the country. (ECHO, 14 Mar 2019)

As of 19 March, more than 122,600 people across 14 provinces have been identified as being affected by the March floods and in need of humanitarian assistance. As a result of the floods, 63 people are known to have died and a further 31 people have been injured. The highest number of affected people are in Farah, where almost 52,000 people are in need of humanitarian assistance. A further 32,750 people in Kandahar and 18,340 people in Hilmand also require assistance. (OCHA, 19 Mar 2019)

Heavy rains caused flash flooding on 27, 28 and 29 March in six provinces - Faryab, Balkh, Jawzjan, and Sar-e-Pul province in the Northern Region, and Hirat and Badghis in the Western Region. An estimated 17,000 people have been affected with Balkh and Hirat suffering the worst impacts. In Balkh, unconfirmed reports suggest several fatalities in Chemtal district, with up to 645 families (4,515 people) affected throughout the Province. In Hirat, Ministry of Health has reported that eight people died and nine were injured in six districts following flash flooding, while more than 1,000 families may have been affected. This new flooding adds to the impact of the overall flood emergency, with Farah and Kandahar the most effected to date. Since the beginning of 2019, more than 163,000 people have now been affected by floods, including those in the past week. A total of more than 42,000 people have been displaced. (OCHA, 2 Apr 2019)

After heavy rainfall that affected 22 out of the 34 Provinces of Afghanistan over the past few days, the death toll has risen to at least 16. According to media, as of 18 April at 8.00 UTC, in eastern Nangarhar Province, 11 people have died, six are injured and 266 houses were washed away, while in the western Province of Herat the death toll stands at five. (ECHO, 18 Apr 2019)

Unseasonal heavy rains and floods affected a number of regions of Afghanistan as well as Kabul, between 13 and 19 April. As of 22 April, 1,700 people have been affected with 16 people killed, 112 injured, and 250 houses damaged or destroyed due to flash floods. The floods have also damaged crops and infrastructure, including roads. (OCHA, 22 Apr 2019)

Afghan Red Crescent Society (ARCS) teams carried out rapid needs assessments of flood-affected areas on 1-9 March, and 10-14 April which showed mass destruction of houses and shelters, loss of lives, public facilities, mosques and displacements of people from their homes and IDPs camps due to the floods. It is anticipated that more rains shall fall in the coming months with little resources on the ground to respond to the needs of people in different provinces. The resilience of people in most of the provinces is already weak because of earlier protracted drought. There is a huge need in emergency shelter on the ground. Besides, there is continuous population movement from the rural villages to safer places with available humanitarian assistance and better basic services. (IFRC, 10 May 2019)

Heavy rainfall in recent days has triggered flash floods in a number of areas with Kabul, Parwan, Ghour, Herat, Bamyan and Ghazni most affected. According to media reports, as of 27 May at 8.00 UTC, 24 people have died, 11 are injured and 550 affected. 220 houses have been destroyed and 116 partially damaged. Over the past 24 hours, light to moderate rain is forecast in the northern part of the country. (ECHO, 27 May 2019)

Heavy rain affected several parts of Afghanistan over the past week, causing flash floods and triggering landslides. According to media reports, as of 11 June at 8.00 UTC, three people died and several houses have been destroyed after flash floods in Afghanistan. (ECHO, 11 Jun 2019) 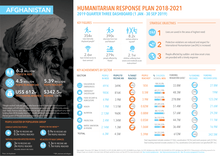 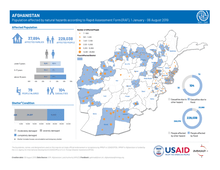 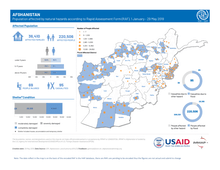