Floods in the Mekong Delta are expected to occur earlier this year due to higher than average rainfall, according to Viet Nam's National Centre for Hydro-Meteorological Forecasting. This year’s flood peak is expected to occur in the first half of October, at levels 2 and 3 (Tiền River in Tân Châu station, from 4.0 to 4.5m; and Hậu River at Châu Đốc station from 3.5 – 4.0m). (VNS, 12 Jun 2017)

Vietnam Red Cross Headquarters has decided to provide initial support for mountainous provinces in the Northern of Vietnam, including Ha Giang, Hoa Binh, Lao Cai, Lai Chau, Son La, Thai Nguyen, Dien Bien, in order to help affected families to overcome the consequences of land erosion and flash floods, as the result of the torrential and prolonged rains recently. 17 families losing their family member or having houses collapsed or swept away will receive VND 3 million each case. 28 temporary shelters have also been erected for affected communities to use before their houses are repaired or rebuilt. (Vietnam Red Cross Society, 12 Jul 2017)

As of 10 August, the latest reports indicated the following casualties: 27 deaths, 14 people missing, and 231 houses washed away or collapsed. A further 425 houses were damaged and about 340 hectares of agricultural land were damaged by landslides. (ASEAN, 10 Aug 2017)

Tropical Depression 23W developed in the Vietnam Eastern Sea (South China Sea). On 8 October, the level of danger was raised to orange, with high winds up to 40 mph. The storm brought heavy rain which caused land erosion and flooding to parts of central and northern Viet Nam since 9 October. As of 14 October, the water levels in some rivers are at record high. Continuous rain has resulted in an increasing level of damage and loss in some Northern Central and Northern provinces. The death toll from landslides and heavy rain has climbed to 68 as of 15 October.

The Vietnam Disaster Management Authority said in a statement on 15 October 2017 that 32 people were injured while 34 others are still missing. The torrential rains and landslides also damaged infrastructure and killed more than 230,000 livestock in the central and northern regions. Disaster officials in the hardest-hit province of Hoa Binh in the north said that 300 soldiers, police and military personnel were still searching for eight people missing from a landslide. (IFRC, 16 Oct 2017)

The Ministry of Health warns of possible disease outbreaks as flooding follows an existing high number of dengue fever cases in the affected region. By the end of September 2017, 2,602 cases had been reported in Thanh Hoa province, and most affected areas for cases of dengue are in the flooded areas in Tinh Gia, Thach Thanh and Hoang Hoa districts. Flood damage created perfect mosquito breeding sites, raising particular concern related to waterborne disease. In addition to dengue, malaria, typhoid and influenza are highlighted as diseases of concern, as flooding coincides with their peak transmission period. (IFRC, 24 Oct 2017)

In October, approximately 10,900 meters of flood-prevention embankments were damaged by floodwaters in Yen Bai Province. The majority of damaged embankments run alongside streams, coinciding with nearly 30 landslide areas. A local official reported that hundreds of households in Van Chsn District and Nghia Lo Town are prone to flood risk without the repair of the affected embankments. (Viet Nam News, 31 Oct 2017) 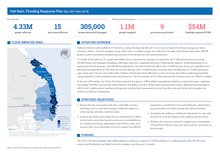 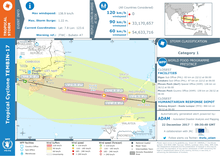 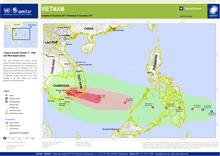