Flash floods caused by torrential rains starting in July 2013 swept the Far East Federal District of Russia, mainly affecting Khabarovsk Krai, Amur Oblast, and the Jewish Autonomous Oblast. The level of water of the Amur river significantly increased to 9 meters, its historical maximum from the last 100 years. According to EMERCOM, 137 settlements, 6,321 houses populated by 34,135 people, 216 sections of local roads and 59 road bridges were flooded in 25 municipalities. Between August and September 2013, large territories of Far East with a total population of more than 134,000 people, were disaster-stricken areas; more than 10,000 people were evacuated to safe places, and over 20 temporary shelter points were established to accommodate more than 5,000 people who could not return to their houses. (IFRC, 28 Nov 2013) 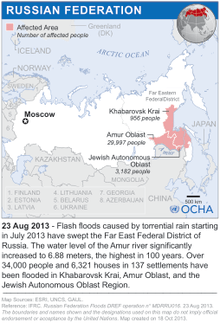