More than 900,000 families (4.4 million people) in northern and central Luzon including Metro Manila were affected by severe flooding brought by the Southwest Monsoon since June 2012. The rains and floods left 78 people dead, 11 missing, 36 injured, and caused extensive damage to agricultural products and infrastructure. Of the 4.4 million people affected, over 1 million were displaced; 1.2 million are living with relatives and friends while 135,308 people are still residing in 431 evacuation centers across the affected areas in Luzon as of 31 Aug. Local authorities are expecting prolonged displacement of people from areas where floodwaters are historically known to slowly subside. (OCHA, 6 Sep 2012) 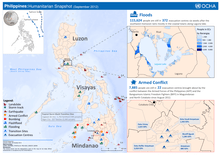 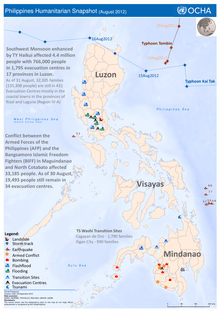