At least twenty dead bodies were recovered during search and rescue operations coordinated by officials of the National Emergency Management Agency following the flood that devastated Ibadan and its environs last weekend. The figure of the deaths was given during the visit of Director General National Emergency Management Agency Alhaji Muhammad Sani Sidi to Ibadan on inspection of areas affected by the flood. However, there could be possible higher number of the deaths from some of the remote locations where the inspection team were unable to access. (Gov't of Nigeria, 30 Aug 2011) 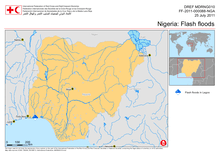