A 7.0-magnitude earthquake struck the mountainous province of Abra at 8.43 a.m. local time on 27 July, triggering landslides and the collapse of structures. The tectonic earthquake’s epicenter was located in the town of Tayum, Abra (17.64°N, 120.63°E - 003 km N 45° W) at a depth of 17 kilometers, with the tremor felt in varying intensities across Northern Luzon including the capital Metro Manila. Initial assessments from local governments, supplemented by reports from the press and social media, indicated collapsed structures, landslides, and damages to roads in the provinces of Abra, Ilocos Sur, Benguet. Water, power and communication lines seem to be functioning in most of the affected areas. At least four deaths were reported but these are still being verified by authorities. According to the initial situation report of Department of Social Welfare and Development (DSWD), there are currently 1,624 people currently in 16 evacuation centers in Ilocos Sur province. (OCHA, 27 Jul 2022)

The National Disaster Risk Reduction and Management Council (NDRRMC) reports, as of 28 July, four fatalities, 131 injured people, more than 1,800 evacuated people (of which 567 across 21 evacuation centres) and a total of 12,945 affected people across Ilocos, and Cordillera administrative regions. In addition, NDRRMC reports 868 damaged houses, five damaged bridges and over 20 damaged roads. (ECHO, 28 Jul 2022)

The Department of Social Welfare and Development (DSWD) reported that about 15,300 people are currently displaced, with the IDPs staying in 43 evacuation centers or are being hosted by families/friends in the provinces of Abra, Ilocos Sur, Kalinga, Benguet and Mountain Province. About 11,100 of the IDPs are in Abra province, where traumatized local residents also camped out of their homes as the earthquake was followed by over 1,000 aftershocks with a maximum of 5.0-magnitude. The government also confirmed the deaths of six individuals along with 136 injuries. Based on latest government assessment report, more than 5,200 houses were either damaged or destroyed in the Cordillera and Ilocos Regions, with the numbers expected to rise as teams reach some of the remote and mountainous areas. (OCHA, 29 Jul 2022)

According to the National Disaster Risk Reduction and Management Council (NDRRMC), a total of 48,477 people are currently displaced across the Cordillera and Ilocos Regions. Of the total number of IDPs, 44,889 are camping out in open spaces or are hosted by relatives/friends, while 3,588 are in 38 evacuation centers. The government confirmed the deaths of 10 individuals along with 375 injuries. Disaster authorities reported that 24,547 houses and 177 health facilities were either damaged or destroyed. (OCHA, 1 Aug 2022)

2,202 aftershocks have been recorded with magnitudes ranging from 1.4 to 5.1. Some 404,370 people have been affected, of whom 3,319 people are currently in 30 evacuation centers while another 45,000 people are displaced and staying with family or friends. Abra Province accounted for over 98 per cent of total IDPs. Some 263 schools sustained damage, with 1,157 classrooms either damaged or destroyed. (OCHA, 2 Aug 2022)

As of 3 August 2022, the National Disaster Risk Reduction and Management Council (NDRRMC) reported 421,728 affected people and 65,858 displaced persons. The number of people in need is expected to continue rising in the coming days as damage assessments are still ongoing. During the last 24 hours, 165 aftershocks were recorded out of a total of 2,367, according to the Philippine Institute of Volcanology and Seismology. It was also reported that 28,788 houses and 1,473 public infrastructure assets, including 177 health facilities, were damaged. (ECHO, 3 Aug 2022)

The National Disaster Risk Reduction and Management Council (NDRRMC) reported an increase to 448,990 affected people and 51,238 displaced persons as of 5 August 2022. Less than 5% of the displaced persons are in evacuation centres. Continuous rain due to a Low-Pressure Area adds a further layer of distress for families in makeshift tents. 30,285 houses and 1,477 public facilities and structures have been damaged while some areas still remain inaccessible. (ECHO, 5 Aug 2022)

Following the 7.0 magnitude earthquake on 27 July 2022, the affected population continues to rise. The Philippine Institute of Volcanology and Seismology recorded 3,213 aftershocks thus far and warned that aftershocks may occur for several days or even up to months. As of 8 August 2022, 502,462 people are reported as affected and 53,338 persons are displaced according to the National Disaster Risk Reduction and Management Council (NDRRMC). A total of 29 cities and/or municipalities were declared under the State of Calamity. So far, 35,327 houses and 1,519 public facilities and structures have been damaged. Some areas still remain inaccessible. (ECHO, 8 Aug 2022) 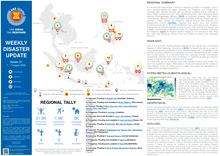 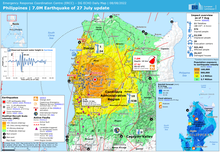 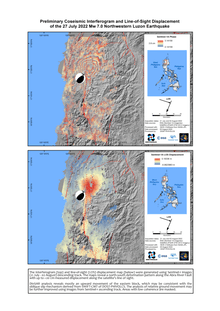