On 26 March, a 6.0-magnitude earthquake was recorded in Ecuador at approximately 11:28 pm. According to Special Seismic Report 2022-001 issued by the Geophysics Institute (IGEPN), the epicentre was located off the coast of Esmeraldas at a depth of 28 km. After a few days, it became evident that the number of affected families continued to increase in different neighbourhoods, as many houses already had previous structural damage from the 2016 earthquake which was worsened by this earthquake. The number of people affected by the earthquake continues to increase on a daily basis. As per Situation Report No. 17, (issued on 6 April 2022 by the National Risk Management Service), 4,097 people have haven reported to be affected mainly in rural parishes of Esmeralda including Tabiazo, Tachina, San Mateo, Vuelta Larga, Chinca, Camarones in Esmeraldas canton, as well as in Quingüe and Daule de Muisne, Súa Atacames. Additionally, people have been reported to be affected in nearby provinces including Cotopaxi, Guayas, Imbabura, Los Ríos, Manabí, Pichincha, Santo Domingo de los Tsáchilas, and Tungurahua. (IFRC, 12 Apr 2022) 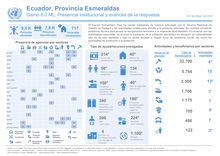 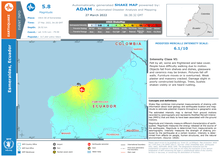 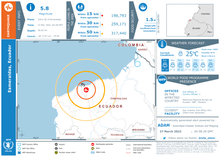