The 6.4 magnitude quake struck just before 4 a.m., 34 kilometres northwest of Tirana, Albania’s capital, and has killed 16 people and injured more than 600, according to the government. There are reports of severe damage to infrastructure, and several buildings have collapsed in Thumane and Durres, with people still thought to be trapped inside. (IFRC, 26 Nov 2019)

According to reports from the Albanian Ministry of Defence, at least 21 people have died in Durrës City and Thumanë Town following the 6.4 M earthquake on 26 November. More than 600 people are injured and 1,200 others were evacuated in Thumanë, Tiranë, Durrës, Krujë and Lezhë. Hundreds of buildings have partially or completely collapsed. (ECHO, 27 Nov 2019)

Since the earthquake struck on 26 November, resulting in 51 deaths and up to 750 people injured, the Albanian Red Cross have been continuing to respond to the needs of the people affected. Aftershocks have decreased in magnitude but are still ongoing. As of 14 December, up to 12,181 people were reported to be living in temporary accommodation (excluding those hosted by relatives or friends): 7,383 in tents (a majority of them in spotted tents in rural areas, close to their individual houses), 4,149 in hotels, 395 in community centres and 254 in gymnasiums. As of 17 December, all tent camps have been closed. (IFRC, 30 Dec 2019) 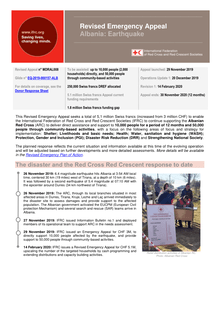 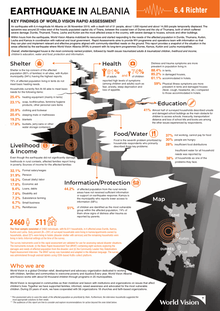 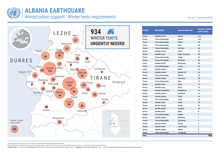 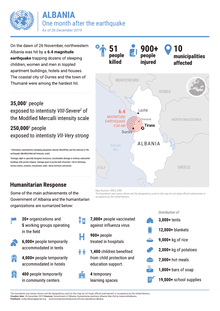