A 7.8-magnitude earthquake hit Balochistan province in southwest Pakistan on 24 Sep 2013, causing at least 348 deaths and affecting over 300,000 people. Awaran and Kech districts were hit the hardest, with 21,000 houses reportedly damaged and the communication system disrupted in the remote and sparsely populated area. Humanitarian partners supported Government authorities to provide assistance. (OCHA, 26 Sep 2013)

A powerful 6.8-magnitude earthquake hit southwest Pakistan on 28 Sep. According to the U.S. Geological Survey, the epicentre of the earthquake was recorded at 96 kilometres north-east of Awaran District, which was hit the hardest by the earlier earthquake. Several homes have reportedly been destroyed in the district, especially in Nok Jo village, Mashkay Tehsil, which has an estimated population of 15,000 people. Reports indicate at least seven people have been killed in Balochistan Province. (OCHA, 28 Sep 2013) 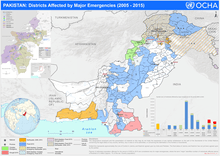 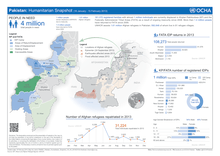 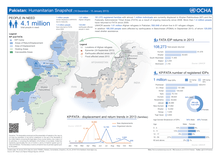