On 19 April 2010, an earthquake measuring 5.3 on the Richter scale struck Samangan province in northern Afghanistan. This resulted in the death of 8 people and 50 injured, with homes in more than 50 villages completely or partially destroyed in the districts of Dara-i-Sufi Bala, Dara- i-Sufi Payin and Ruyi Du Ab. The area continued to be affected by aftershocks and later in the spring by floods which increased the vulnerability of the communities and further damaged the partially destructed houses (The NGOs and Humanitarian Reform Project)

The affected villages were remote and extremely difficult to access, located at high altitudes, ranging between 2,200 and 2,600 metres above sea level and exposed to extreme weather, snow and severe cold, rain and strong winds. Assistance was provided to the 3,000 affected families. Daily aftershocks continued to further destroy damaged homes and people feared returning to their homes. Cold weather caused problems for families affected by the earthquake, with increasing risks of hypothermia for people sleeping outdoors. (OCHA, 1 May 2010) 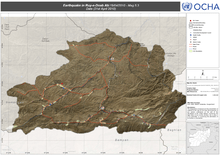