On Monday, 21 September 2009, an earthquake measuring 6.1 on the Richter scale hit at 02:53:05 pm local time in Mongar in Bhutan. The US Geological Survey initially reported the earthquake as 6.3 mw which was later revised to 6.1 mw.

The epicenter of the earthquake was located 177 km from Thimpu , the Bhutanese capital. As of 09:30 pm local time in Bhutan, 12 people had been killed - 5 in Mongar, 4 in Samdrup Jongkhar and 3 in Trashigang. Seven more tremors were felt in Transhigang after the earthquake hit, with the first few tremors occurring every half an hour. In Mongar, three more tremors were felt. The earthquake was felt in the north-east states of India, including Assam, Arunachal Pradesh, Bihar, Meghalaya, Sikkim and West Bengal. It was also felt in Bangladesh. (UNCT, 22 Sep 2009)

The earthquake in Bhutan caused damage to buildings and infrastructure in Bhutan and parts of northeast India. The Government of Bhutan reported 12 deaths and 35 injured on 1 October 2009. The earthquake severely affected living conditions leaving homes, schools and government buildings damaged beyond repair. The Government estimates that up to 8,400 people may have been left homeless. (OCHA, 7 Oct 2009) 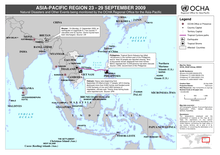 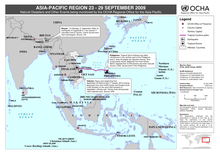 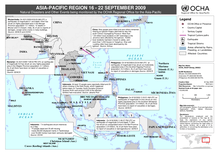