On 10 September, the Syrian Ministry of Health (MoH) declared an outbreak of cholera in Aleppo Governorate following 15 confirmed laboratory cases, including one death. Between 25 August and 10 September, the surveillance data showed that a total of 936 severe acute watery diarrhoea cases were reported in Syria, including at least eight deaths. Most of the cases were reported from Aleppo (72.2%, 676 cases), Deir-ez-Zor (21.5%, 201 cases), Ar-Raqqa (1.8% 17 cases), Al Hasakeh (4.1%, 38 cases), Hama (0.2%, 2 cases) and Lattakia (0.2%, 2 cases). The number of confirmed cholera cases so far is 20 in Aleppo, four in Lattakia and two in Damascus (people coming from Aleppo). Based on a rapid assessment conducted by health authorities and partners, the source of infection is believed to be linked to people drinking unsafe water from the Euphrates River and using contaminated water to irrigate crops, resulting in food contamination. (OCHA, 12 Sep 2022) 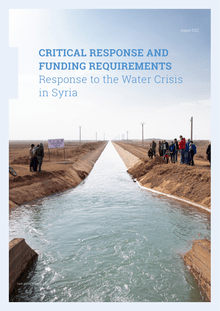