On 8 October 2021, the Ministry of Health of the Democratic Republic of the Congo (DRC) announced that a new laboratory-confirmed case of Ebola virus disease (EVD) had been detected in Butsili Health Area, Beni Health Zone in North Kivu Province. Earlier this year, an EVD outbreak affected North Kivu Province which was declared over on 3 May 2021. (WHO, 10 Oct 2021)

Ebola vaccination began today in the Democratic Republic of the Congo’s North Kivu Province where a case was confirmed on 8 October. People at high risk, including contacts of the confirmed case and first responders will receive the doses as the health authorities move to curb the spread of the virus. (WHO, 13 Oct 2021)

A total of five cases of Ebola virus disease (EVD) have been confirmed in North Kivu province since 8 October 2021. Three people died and all cases are from a community in the Beni health zone. Ten patients are hospitalised, including two confirmed and eight suspected cases. 386 contacts have been established so far, with 322 followed in the last 24 hours and 140 people have been vaccinated so far. The index case, diagnosed on 8 October and deceased in a health facility, had three family members who died in September, but they were not investigated for Ebola. The detected Ebola strain is 96% similar to the one from the 10th EVD outbreak in the Democratic Republic of the Congo (2018-20). (ECHO, 19 Oct 2021)

As of 24 October, six cases have been confirmed, the last case was reported on 22 October. All the cases have been from the Health Area of Butsili, Beni Health Zone: 4 people have died, and 2 people are currently in isolation at the temporary Ebola Treatment Center in the General Reference Hospital in Beni. Preliminary sequencing conducted indicates that this outbreak is likely linked to the 2018-2020 Nord Kivu/Ituri Ebola outbreak and was initiated by transmission from a persistently infected survivor or a survivor who experienced relapse. (UNICEF, 27 Oct 2021)

As of 31 October 2021, eight cases (5 female and 3 male) have been confirmed, the last case reported on 30 October 2021. Three Health Areas Butsili, Ngilinga, and Bundji have now reported cases, all of which within the Beni Health Zone. 6 people have died, 1 has tested negative and 1 currently still under treatment at the temporary Ebola Treatment Center in the General Reference Hospital in Beni. (UNICEF, 3 Nov 2021)

No new case of the Ebola virus disease has been recorded in the Beni Health Zone in North Kivu province in the past 16 days, the last confirmed case being on 30 October. The health response to the Ebola outbreak is currently focusing on community surveillance, which remains a major challenge with the low number of community alerts. (OCHA, 18 Nov 2021)

The Ebola outbreak that erupted in the Democratic Republic of the Congo’s North Kivu Province in October – the second in 2021 – was today declared over, the national health authorities announced after no new cases were reported at the end of a 42-day countdown, or two incubation periods after the last confirmed case was discharged. In total, 11 cases (eight confirmed, three probable), including six deaths were reported in the outbreak that was declared on 8 October after a new case was confirmed in Beni health zone in the country’s North Kivu Province. This was the country’s 13th outbreak and occurred in the same area as the 2018 outbreak which lasted two years. (WHO, 16 Dec 2021) 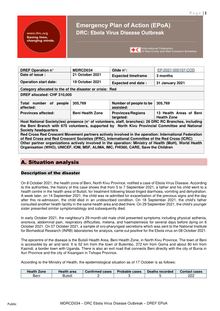 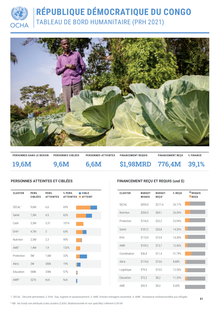 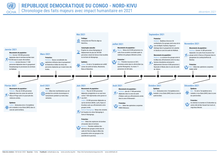 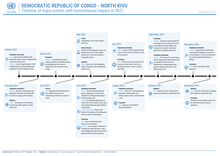