Health authorities in Guinea today declared an outbreak of Ebola in the rural community of Gouéké in N’Zerekore prefecture after three Ebola cases were confirmed by the national laboratory, marking the first time the disease has been reported in the country since an outbreak ended in 2016. Initial investigations found that a nurse from the local health facility died on the 28 January 2021. Following her burial, six people who attended the funeral reported Ebola-like symptoms and two of them have died, while the other four have been hospitalized. Guinea was one of the three most-affected countries in the 2014–2016 West Africa Ebola outbreak which was the largest since the virus was first discovered in 1976. (WHO, 14 Feb 2021)

Ebola vaccination of people at high risk kicked off today in Guinea as the emergency response was escalated to counter the spread of the virus that re-emerged in the country a little more than a week ago for the first time since 2016. (WHO, 23 Feb 2021)

As of 3 March, 17 cumulative cases (4 probable and 13 confirmed) have been declared and among those cases, eight have died (4 probable and 3/4 confirmed). Nine confirmed cases and two suspected case are currently in isolation in dedicated health care facilities in N'Zerekore and two have been released from the treatment centres in of Conakry and N'Zerekore. (IOM, 4 Mar 2021)

As of May 13, 2021, 16 cases of Ebola were confirmed in Guinea, including 5 confirmed deaths and 10 recoveries. 9,829 people have been inoculated (including 2,694 frontline staff) since the official launch of the vaccination on February 23, 2021. UNICEF provided psychosocial support to 132 children (including 77 girls) in the families of contact cases identified by social workers. 775 live alerts and 15 community deaths were reported through active community surveillance by the 345 social mobilizers and 40 supervisors deployed in the field. The countdown (42 days) to the end of the epidemic started on May 8th, 2021. The funding gap for the response is currently at 60%. (UNICEF, 13 May 2021)

The Ebola outbreak that emerged in Guinea in mid-February was declared over today. It was the first time the disease resurfaced in the country since the deadly outbreak in West Africa that ended in 2016. Guinean health authorities declared the outbreak on 14 February 2021 after three cases were detected in Gouecke, a rural community in the southern N’zerekore prefecture, the same region where the 2014–2016 outbreak first emerged before spreading into neighbouring Liberia and Sierra Leone and beyond. A total of 16 confirmed and seven probable cases were reported in Guinea’s latest outbreak in which 11 patients survived and 12 lives lost. Shortly after the infections were detected, national health authorities, with support from World Health Organization (WHO) and partners, mounted a swift response, tapping into the expertise gained in fighting recent outbreaks both in Guinea and in the Democratic Republic of the Congo. (WHO, 19 Jun 2021) 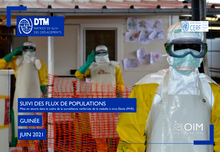 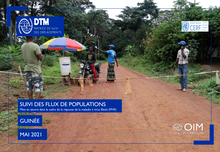 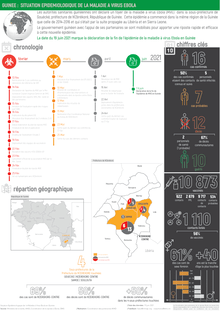