On 6 February 2019, the Department of Health (DOH) declared a “measles outbreak” in the National Capital Region (NCR) and Region 3 (Central Luzon). On the 7 February 2019, DOH announced that the measles outbreak had spread to more areas in Luzon and Visayas in CALABARZON, Region 6 (Western Visayas) and Region 7 (Central Visayas). Unconfirmed reports from DOH report around 72 deaths among more than 2,000 cases of measles nationwide. While according to San Lazaro Hospital Epidemiology Department (Special National Hospital Medical Center for Infectious Diseases with a 500-bed capacity), there are 1,187 reported suspected measles cases in Metro Manila since January 2019, with 55 deaths. On 5 February 2019, at least 248 children and 21 adults were being treated for measles in the hospital. Most of the confirmed deaths are children aged three months to four years old. (IFRC, 8 Feb 2019)

Cities in NCR with the most cases are: Manila, Caloocan, Marikina, Pasig, Navotas, Parañaque, Taguig, Pasay, and Malabon. (IFRC, 12 Feb 2019)

From 1 January to 13 February, the DOH reported over 4,300 confirmed measles cases. Severe complications from measles have also claimed the lives of 70 people, 1 in 3 of which were children younger than nine months old. More than 80 per cent of 2.6 million unvaccinated children are in the seven regions which have declared outbreaks - Regions III, IVA, IVB, VI, VII, VIII, and the National Capital Region. DOH activated its Incident Command System to implement the nationwide vaccination campaign which will target 95% of the estimated 2.6 million unvaccinated children under 5 years. (OCHA, 15 Feb 2019)

Between 1 January and 18 February 2019, 9,267 measles cases including 146 deaths were officially reported through the routine surveillance system from the Philippines Department of Health (DoH): a 266% increase with the same time period in 2018. (UNICEF/WHO, 20 Feb 2019)

Since declaring a measles outbreak on 6 February, the number of cases continues to surge and the Department of Health has reported 12,736 cases of measles and 203 deaths nation-wide as of 24 February. According to the second joint situation report issued by the WHO and UNICEF, the overall risk is assessed as high due to the large number of cases, chronicly low routine immunisation coverage, and increased vaccination hesitancy. Fifty-seven per cent of measles cases are children under five years, with over 80 per cent of cases citing children are not vaccinated. (OCHA, 25 Feb 2019)

The number of cases and deaths due to an outbreak of measles continues to rise. As of 2 March, 16,349 measles cases including 261 deaths were reported by the Department of Health (DOH). There are a number of reports of cases from the Philippines in neighboring countries. The Philippines Government has launched a large-scale information campaign urging parents to have their children vaccinated. The DOH is organising house-to-house vaccinations nationwide, with a strategy to vaccinate all children under five. The Philippine Red Cross has mobilized volunteers to support the immunization campaign and has set up tents in hospitals dedicated to responding to the measles outbreak. (OCHA, 4 Mar 2019)

Between 1 January and 14 March 2019, 21,396 measles cases including 315 deaths were officially reported through the routine surveillance system from the DoH: a 384% increase with the same time period in 2018. With a median age of 3 years old, 54% of measles cases are under 5 years of age. The majority of measles cases are male (53%). As of 14 March 2019, 60% of cases have no documented vaccination status. DoH estimates that 2% of cases had been previously vaccinated with one or 2 doses. The vaccination status of the remainder of cases is unknown. (UNICEF & WHO, 19 Mar 2019)

Between 1 January and 26 March 2019, 25,676 measles cases including 355 deaths were officially reported: a 378% increase with the same time period in 2018. As of 26 March 2019, 59% of cases have no documented vaccination status. DoH data shows that 3% of cases had been previously vaccinated with 2 doses of measles vaccine. The vaccination status of the remainder of cases is unknown. (UNICEF & WHO, 2 Apr 2019)

According to the latest data released by Department of Health (DOH) Caraga, more than 1,200 cases of measles have been recorded in the Caraga region. From January 1 to June 22, 2019, cases of measles have already reached to 506 percent higher than 199 percent of the same period last year. Based on DOH’s record, Caraga was declared above alert level due to the increasing number of cases wherein for June 2019 alone, some 20 individuals have already died due to measles, 18 of which are from Agusan del Sur particularly in the municipality of San Luis with two fatality; municipality of Loreto with three fatality; and four in Talacogon. (Govt. of the Philippines, 26 Jun 2019)

Based on the DOH’s Measles and Rubella Surveillance Report – for the reporting period 1 January to 29 June 2019 –, there have been 38,602 measles cases reported, with 522 deaths. For the same period last year, there were 10,148 cases and 86 deaths. In the whole year of 2018, there were 21,812 measles cases reported with 202 deaths. The median age of people dying is one year old and the case fatality rate is high, at an average of 1.4 per cent with a range of 0.2 per cent to 2.2 per cent. So far, on average, 20 children are dying per week from measles this year. DOH’s latest reporting show the number of cases per week has now returned to below the number of the same period in 2018. This indicates that the epidemic is stabilizing from the its most deadly phase. The main priority now should be supporting the government initiatives to ensure at least 95 per cent coverage of population will provided with measles containing vaccine (MCV). (IFRC, 6 Sep 2019)

From 1 January to 12 October 2019, over 42,400 cases were reported by DOH. Severe complications from measles have also claimed the lives of over 560 people. As of 25 October, the reported cases of measles are declining as well as the case fatality rate. (OCHA, 24 Oct 2019)

As of 29 November, almost 43,400 measles cases, with more than 570 deaths, had been recorded. The Philippine Red Cross has combined its polio and measles response plans to boost operational synergies and improve efficiency. The combined campaign is designed to target 1.2 million people with messaging, including 70,000 immunizations for children. (IFRC, 23 Dec 2019). 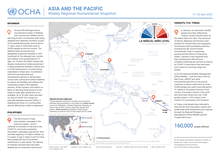 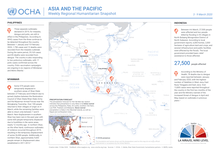