On 27 March, the Government confirmed five cases of cholera at Munhava health centre in Beira City, according to the National Director of Medical Assistance, Ussene Isse. The authorities also reported some 2,500 cases of acute watery diarrhoea (AWD) in Beira district. A total of 900,000 cholera vaccine doses are expected to arrive in Mozambique by 1 April and micro-planning for the vaccination campaign is underway. (OCHA, 27 Mar 2019)

Since the declaration of the cholera outbreak on 27 March 2019, and up to 18 April 2019, a cumulative total of 6,382 cases and 8 deaths were reported (CFR 0.1%). These cases were reported from the four districts (Beira, Buzi, Dondo and Nhamatanda) of Sofala Province originally affected by this outbreak. Beira district continued to be the most affected district with an overall attack rate of 909 cases per 100,000 population. (UNICEF, 2 May 2019)

The cholera outbreak is showing a downward trend following the effective cholera vaccination campain that reached 98.6% of the population in the last two weeks. Since the declaration of the cholera outbreak on 27 March 2019 until 5 May 2019, 6 739 cases and eight deaths have been reported (CFR 0.1%). All cases were reported from the four districts (Beira, Buzi, Dondo and Nhamatanda) of Sofala Province. (WHO, 26 May 2019)

The cholera outbreak continues to improve in provinces that were affected by the cyclones (Kenneth and Idai) in 2019. As of 19 June 2019, 284 cases and no deaths were reported in Cabo Delgado province, with Pemba being the most affected and a total of 6 768 suspected cases and 8 deaths were reported in Sofala, with Beira being the most affected district. Sofala province has not reported cases of Cholera for the last eighteen days. (WHO, 7 Jul 2019) 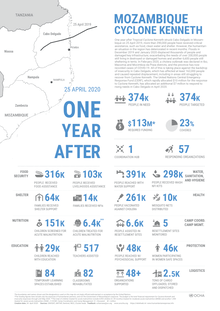 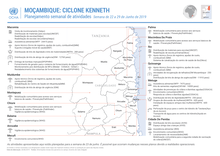 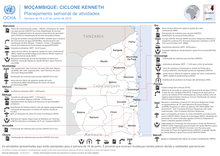