On 6 September 2018, a cholera outbreak was declared in Harare by the Ministry of Health...after confirmation of 11 cases for cholera on rapid diagnostic test kits and the clinical presentation. (WHO, 7 Sep 2018)

Authorities report that the outbreak began on 1 September in Harare and as of that date to 11 September, the Ministry of Health and Child Care reports that there have been nearly 2000 suspected cholera cases, including 58 confirmed cases and 24 deaths.

Glenview, a high density suburb of Harare with an active trading area and a highly mobile population, is at the epicentre of the outbreak. The area is vulnerable to cholera because of inadequate supplies of safe piped water, which has led people to use alternative unsafe supplies such as wells and boreholes. Cases that are linked to the epicenter in Harare have been confirmed in 5 additional provinces.

The Government of Zimbabwe has declared a state of emergency and is working with international partners to rapidly expand recommended cholera response actions, including increasing access to clean and safe water in the most affected communities and decommissioning contaminated water supplies. Authorities and partners are also intensifying health education to ensure that suspect cases seek care immediately and establishing cholera treatment centres closer to affected communities. (WHO, 13 Sep 2018)

An outbreak of cholera declared on 6 September has killed at least 30 people and infected at least 5,460. The most severely affected areas are the two epicentres of the outbreaks in the suburbs of Glenview and Budiriro in western Harare. The outbreak has spread from Harare to Chitungwiza, and west to Gokwe and Bulawayo. Cholera is reportedly spreading to different areas of the country. Poor WASH and health infrastructure are facilitating the rapid spread of the disease. High WASH needs, including clean drinking water, hygiene promotion and temporary sanitation facilities, have been reported. (ACAPS, 18 Sep 2018)

As of 19 October 2018, a cumulative total of 9 404 cases with 54 deaths (case fatality ratio 0.57%) have been reported from nine provinces across the country. Of the reported cases, 231 are confirmed by culture. Harare (9 096 cases) and Chitungwiza (110 cases) cities in Harare Province have reported the majority of the cases (suspected and confirmed) accounting for 98% of the cumulative cases reported across the country. The most affected areas in Harare City are the densely populated urban suburbs of Glen View (4 154 cases), Budiriro (2 691 cases), Mbare (373 cases) and Glen Nora (297 cases). Other provinces reporting cases include Manicaland Province (100), Bulawayo (38), Mashonaland East province (35), Mashonaland Central province (11), Midlands Province (10), Masvingo (2), atabeleland South (1), and Mashonaland West (1). (WHO, 19 Oct 2018)

The cholera outbreak in Zimbabwe has markedly improved, following strong interventions by the national authorities and partners. However, sporadic cases continue to occur in Harare city, while a new and fast-evolving foci has emerged in Mount Darwin District, which requires urgent attention. The occurrence of poradic cholera cases in Harare city has been dragging on for several weeks and could serve as a potential source of infection to other places, such as the ongoing flare-up in Mount Darwin District. (WHO, 30 Nov 2018)

Chiredzi district in Masvingo Province is the latest area to report an outbreak of cholera with three suspected cases, of which one has been confirmed by culture. Across the country, 15 new cases were reported on 12 December 2018, with nine from Harare City and six from Mount Darwin District in Mashonaland Central Province. The outbreak is largely under control in Harare City, but there has been a recent spike of cases in Mount Darwin and Chiredzi districts. (WHO, 14 Dec 2018)

The cholera outbreak in Zimbabwe has continued to improve since its onset in week 36 (week ending 9 September 2018). The declining trend observed since the peak of the outbreak in week 38 continues to be maintained despite an upsurge in week 48 caused by the emergence of new cases in Mount Darwin District in Mashonaland Central province where the outbreak is ongoing. Harare city has not reported new cases since 11 December 2018. Since our last report on 30 November 2018 (Weekly Bulletin 48), there have been 161 new cases of cholera with four deaths reported nationally. (WHO, 21 Dec 2018)

Thirty-one cases were identified retrospectively and added to the cumulative number of cases. Majority of these retrospective cases were reported from Harare with onset between 12 and 25 December 2018. There has been a dramatic decline in the number of new cases with only two cases reported across the country in the week leading to 5 January 2019. (WHO, 11 Jan 2019)

The end of this outbreak is anticipated soon as there have been very few sporadic cases reported from Mt. Darwin and Murehwa districts in the past weeks. No new case has been reported from Harare, the epicentre of the outbreak, since 26 December 2018. (WHO, 31 Mar 2019)

The mop up campaign in the remaining hard to reach areas of Vhimba and Rusitu has concluded the first round of the Oral Cholera Vaccination campaign in Chimanimani and Chipinge districts. A total of 482,910 individuals were vaccinated in the two most affected districts. Women and girls accounted for 55.6 per cent and children aged less than 4 years were 13.3 per cent. MOHCC, WHO, UNICEF and partners have started the microplanning with authorities in the two districts for the second round of vaccination which is planned between 27 May and 1 June, targeting the same number of people. (OCHA, 6 May 2019)

No suspected cases of cholera and deaths were reported during week 21 (week ending on 26 May 2019). The last case reported from the country was from Shamva district on 12 March 2019. A second round of oral cholera vaccine was concluded in March. The cumulative figures for cholera are 10 421 cases and 69 deaths. (WHO, 09 Jun 2019) 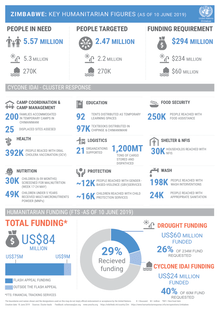 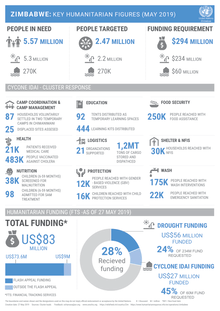 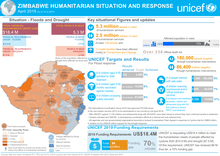