In Fiji, at least 424 DLI (dengue-like illness) cases were reported on 11 March 2018(WHO, 11 Mar 2018). The country declared the dengue outbreak over in June. The Fiji Ministry of Health and Medical Services reported in a decrease in the number of dengue fever cases reported nationally in the last six weeks. The number of cases at present is at the levels usually seen during this time of the year. Source: Media (WHO, 14 Jun 2018).

In Tonga, the government reported that there are at least 70 dengue cases. An outbreak was declared in late January (Radio New Zealand International, 15 Mar 2018). On 6 May, WHO has reported a significant decrease in weekly number of cases (dengue serotype-2) in Tonga (WHO, 6 May 2018).

On 27 February, an ongoing dengue situation was reported in Vanuatu with 86 suspected cases. Of these, 25 were confirmed by NS1 or IgM and samples and pending PCR and Serotyping at Institute Pasteur in New Caledonia (IPNC) (WHO, 1 Mar 2018). As of 3 June 2018, a total of 504 suspected dengue cases have been reported of which 493 Rapid Diagnostic Tests have been done and confirmed 70 cases positive with Dengue, 61 from Sanma Province, 4 from Shefa province, 3 from Penama province and 2 from Malampa Province (Gov't of Vanuatu, 3 Jun 2018). 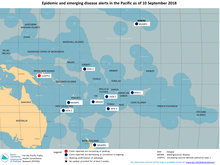 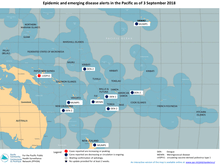 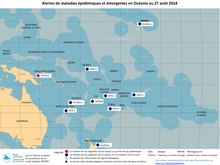