A cholera outbreak that started in Blue Nile state in August 2016 began to spread rapidly as of April this year. Conservative estimates suggest a minimum of between 15,000-23,000 people infected, with 280-820 deaths. It is currently affecting Gedarif, White Nile, Khartoum, Sennar, River Nile, North Kordofan, and Gezira states. White Nile is host to a large South Sudanese refugee population and has had the highest number of cases so far. A state of emergency has not yet been declared and response has been limited. An underfunded health system and poor WASH facilities have contributed to the spread of infection. (ACAPS, 16 Jun 2017)

In Sudan, cases of acute watery diarrhoea have appeared for the first time in camps hosting internally displaced Sudanese in Darfur. (WHO, 10 Jul 2017)

According to the Federal Ministry of Health (FMoH) and [WHO] as of 18 August 2017, 30,762 cases of Acute Watery Diarrhoea (AWD)—including 657 related deaths—have been reported in the 18 states in the country since August 2016. Based on the attack rate projections another 36,000 to 40,000 cases are expected over the next six to nine months, according to the FMoH and WHO. The AWD is affecting all demographics, with females constituting 54 per cent of the cases and children under five years of age accounting for 8.1 per cent. (OCHA, 27 Aug 2017)

Only 78 new cases of AWD and two related deaths were reported from 8 to 14 October, down from a peak of nearly 2,000 new cases at the end of June 2017. Eight states reported active case transmissions and the only state reporting two AWD-related deaths was South Kordofan. Meanwhile, the FMoH continued to lead an active scale-up of interventions to ensure a final stop to the spread of AWD. (OCHA, 22 Oct 2017)

While all the other 17 States in Sudan—where AWD was reported before—continued to report zero cases in the past three months, during March, new cases of AWD] were reported in Central Darfur State. Between 1 March and 3 April 2018, 151 cases of AWD were reported in Central Darfur, with no AWD-related deaths. The total number of new AWD cases reported from Central Darfur from February to March is 468, with almost all cases reported from 63 inaccessible villages in West Jebel Marra locality. The incidence of AWD outbreak in Sudan started on 17 August 2016 in Kassala State and by May 2017 had spread to 10 states, expanding by August 2017 to all 18 of Sudan’s states. So far, the disease has claimed 823 deaths (case fatality rate of 2.23 per cent) resulting from 37,000 cases (attack rate – 10,09 per 10,000). (OCHA, 29 Apr 2018) 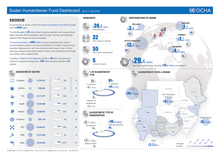 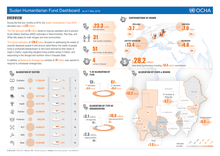 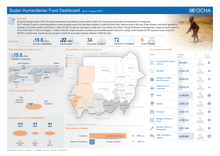