As at April 3, 2017, a total of 2,997 suspected cases of CSM have been reported in 16 States in Nigeria, of which 146 have been laboratory-confirmed. Unfortunately, 336 deaths have also been recorded...A total of 500,000 doses of Meningitis C vaccines have been distributed to some of the affected States for immediate outbreak response vaccination. An additional 823,970 doses of Meningitis C vaccines are expected from the UK to support vaccination activities in other affected States. The Emergency Operations Centre will support State-wide vaccination campaign which starts in Zamfara State on Wednesday the 5th of April, 2017. (Govt, 4 Apr 2017)

The number of new cases of suspected meningitis being reported has begun to decline as outbreak control measures take effect. A total of 628 new cases were reported in week 16 versus 1,935 in week 15 and 2,127 in week 14. The cumulative number of suspected cases recorded in Nigeria throughout the outbreak period is now 9,646 and 839 deaths from 43 Local Government Areas in 23 states. (Govt, 26 Apr 2017)

Health sector is supporting the State Ministry of Health and State Primary Health Care Agency in Adamawa, Borno and Yobe states to lead the preparedness process for cerebro-spinal meningitis epidemic, which is a looming threat in the region. A draft epidemic preparedness and response plan has been prepared for North-East Nigeria. As of April 13, 2017, a total of 5,695 suspected cases have been reported; included 221 (4%) laboratory confirmed cases; and 611 deaths (WHO, Gov't Nigeria, Health Cluster, 30 Apr 2017.)

The meningitis outbreak situation in Nigeria is gradually improving. During week 18 (week ending 7 May 2017), the four most affected states of Zamfara, Sokoto, Katsina and Kebbi observed reduction in the weekly caseload and deaths. (WHO, 12 May 2017)

The Nigeria Federal Ministry of Health has, on 23 June 2017, officially declared the end of the 2016/2017 meningitis outbreak in the country. This declaration comes four weeks after the number of new meningitis cases reported each week fell below the epidemic and alert thresholds in all Local Government Areas. Since onset of the outbreak on 18 December 2016, a total of 14,518 suspected / confirmed cases of meningitis were reported from 25 states, with 1,166 deaths, giving a case fatality rate of 8%. (WHO, 23 Jun 2017) 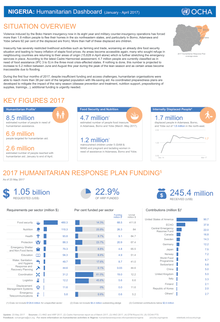 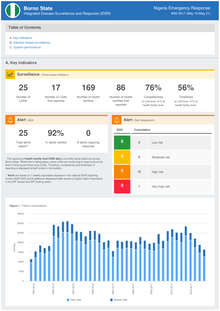 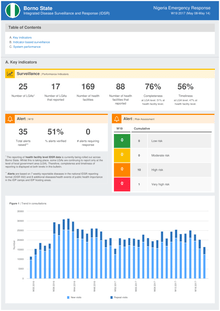